Astro marks this National Day and its 25th year of serving Malaysians by launching the #KitaTeguhBersama campaign, and the Astro 25 on Channel 100, with specially curated local and Asian content from 16 August to 3 October 2021.

Astro marks this National Day with the theme #KitaTeguhBersama that coincides with the company’s 25th year of serving Malaysians.

As a gesture of appreciation to all customers, Astro will launch Astro 25 on Channel 100, with specially curated content featuring the best of Malaysian and Asian entertainment, premieres, blockbuster hits, and new documentaries from 16 August to 3 October 2021 on Astro TV, On Demand and Astro GO.

Henry Tan, Group Chief Executive Officer, Astro said, “It’s a very special Merdeka and National Day for us this year and our theme, #KitaTeguhBersama means we’re stronger and better together. It is a reflection of the best of what we have seen in Malaysians and continues to be the common value we need for us to unite, recover and grow through these times.”

Astro has carried out several initiatives in line with the #KitaTeguhBersama spirit including:
• Supporting the National Blood Bank’s blood donation drive
• Supporting the nation’s COVID-19 Immunisation drive with Public Service Announcements, volunteering
at PPVs and providing TVs and Astro services at quarantine centres nationwide
• Helping the needy through KamiCare community programmes
• Helping SMEs through KamiCare MBiz campaign
• Contributing medical equipment for hospitals and laptops to students in the B40 groups
• Continuing to inform, entertain and uplift Malaysians with our complimentary channels during the MCO,
non-stop dramas, new signatures, and premium original series
• Increasing our academic content to enable kids to learn from home
• Uniting Malaysians in their support and pride for our athletes at the Tokyo Olympics 2020

Tan continued, “Astro is 25 years young this year and we will continue to provide the best mix of content including aggregating the best streaming services i.e. Astro GO, Disney+ Hotstar, HBO Go, iQIYI and soon Netflix. We will also raise the bar for local original content, and live signatures to further delight Malaysians.

"As we look back on the 25 years of serving our customers that included the achievement of many first such as the first HD, 3D and 4K UHD broadcast, first cinema in your home, Astro First, the region’s first 24/7 local sports channel and much more, we are honoured to have played a part in the lives of so many. We championed education, put local sports and athletes on the global stage, raised the bar for local content, discovered and made stars and provided opportunities for Malaysians to shine and realise their dreams and potential.

"Our talents like Nabil, Aznil, Zizan, Remy, Hui Min, Denesh, Ean and Arnold, Chiu Keng Guan, to name a few have gone beyond and achieved their dreams. As they say, dreams are made together and none of these could have been possible without our customers.”

Along the way Rindu Awak Separuh Nyawa on Astro RIA became the #1 drama of 2021 and much awaited exclusives premiered such as Zack Snyder’s Justice League, Friends: The Reunion and the K-drama that had everyone talking, Penthouse. Our vernacular content IPs such as flagship news talk shows, Evening Edition and Prime Talk and best of Chinese signatures Classic Golden Melody and documentary Social Playlist continue to be firm favourites together with popular drama series Tamiletchumy on Astro Vaanavil and movies Vetti Passenge, Vedigundu Passenge and Appalam.

Starting from 16 August to 3 October, all Astro customers can tune into Astro 25 on channel 100 and enjoy new premiering titles: -

• Tanah Tumpahnya Darah Kita, a documentary that originally started off with the story of one man who detailed his sacrifice in the army through letters to his wife and young family and which grew to include the stories of other veterans whose valour in defending our country transcended race, creed, language and culture. In retracing the steps and trials of these brave men we recruited a group of young Malaysian artists including Red Hong Yi who were all keen to be involved in the interpretation of the sacrifice of our brave soldiers.
• We Are No Different by Chiu Keng Guan is the first ever documentary about interracial adoption amongst Malaysian families whose stories are often overlooked by society but treated as the norm. We meet Hero, Sarah, Lavinya and Kamala to uncover their stories about acceptance and the bonds of love that go beyond blood ties.
• Journey To Stardom which chronicles the lives of much loved local celebrities in realising their dreams.

Customers can also enjoy an incredible slate of over 150 titles comprising the best Malaysian and Asian movies, all-time favourite entertainment and reality shows, and with more surprises to come. Be sure to catch some notable Malaysian films, including Ola Bola, The Journey, Paskal, Polis Evo, and Hantu Kak Limah, which have achieved unimaginable box office success beyond anyone’s dreams.

Alvin Teoh, Chief Creative Officer of Naga DDB Tribal, said “This docu-story was years in the making, I was inspired by stories from my father, an artillery officer, who served side by side with soldiers of all creeds and colours during the Daururat and Konfrantasi periods of our history. I am indebted to all involved for bringing to life these personal stories of a remarkable group of men and women from every ethnicity who came together as ‘kita’ to win us the freedom we enjoy today.”

Red Hong Yi said, “Tanah Tumpahnya Darah Kita is significant for me because I realise how little I knew about the veterans before this. Through meeting the veterans, I learned how Malaysia was fought for by people of all kinds of backgrounds who love the country. I hope my artworks will tell the story of the veterans - they deserve much more recognition, honour and respect for the sacrifices they have made for the country.” 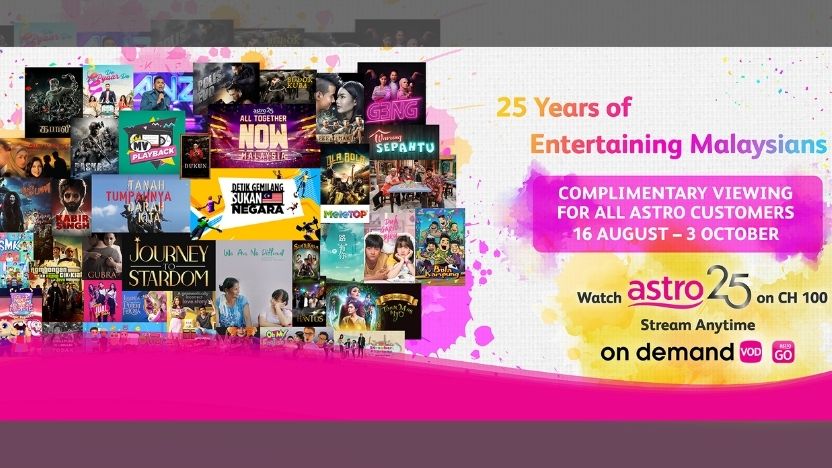 Premiering On Your Mark on Astro First

On Your Mark follows the emotional journey of a father accompanying his physically challenged son in a marathon. The film has garnered a cumulative box office collection of close to RM100 million in China.

Chiu said, “I’m thrilled by the overwhelming support received during the film’s release in China. I hope Malaysian audiences will be touched by the story, especially the father’s and son’s deep love that is portrayed in the film. I also hope that this film will inspire all the young and aspiring Malaysian filmmakers to pursue their dreams and go beyond.”

Astro Radio will be curating a special line-up such as the best of 25 favourite hits, top 25 Malaysian songs and many more over the SYOK app and across the stations. RAAGA will also be bringing a 90-minute National Day virtual concert on 31 August 2021 with performances from renowned local artists on its Facebook page.

Astro is humbled to have served Malaysians for 25 years and will continue its commitment to keeping Malaysia entertained and informed in new ways across TV, radio, digital and commerce platforms. For more information on Astro’s 25th anniversary offerings and #KitaTeguhBersama campaign, visit www.astro.com.my/bettertogether.
#Entertainment#Merdeka#astro25