Chinmayi: I Was Only 15 When I Met My Molester!

It's been a while since South Indian playback singer Chinmayi Sripaada made a shocking allegation against Kollywood's famous poet Vairamuthu.

mag
It's been a while since South Indian playback singer Chinmayi Sripaada made a shocking allegation against Kollywood's famous poet Vairamuthu.

She has been quite outspoken recently, where she even assists other ladies in the industry who faced similar situations via her #MeToo movement.

It was Chinmayi who first pointed out that action should be taken against Bigg Boss Saravanan, who proudly admitted in Bigg Boss S3 show that he used to molest girls in busses during his college days. Following that, Saravanan was evicted from the show.

Now, the singer has taken Twitter to explain her story in depth, that she met her alleged molester at the tender age of 15 when she got the opportunity to sing upon completing 12th standard.

She further spoke about recording for a song in Kannathil Muthamittal at the Panchattan Studios which belongs to AR Rahman; and mentioned that it was the lyricist who molested her.

Chinmayi has spoken about this issue publicly before and Vairamuthu has denied her allegations. Here's what she posted: 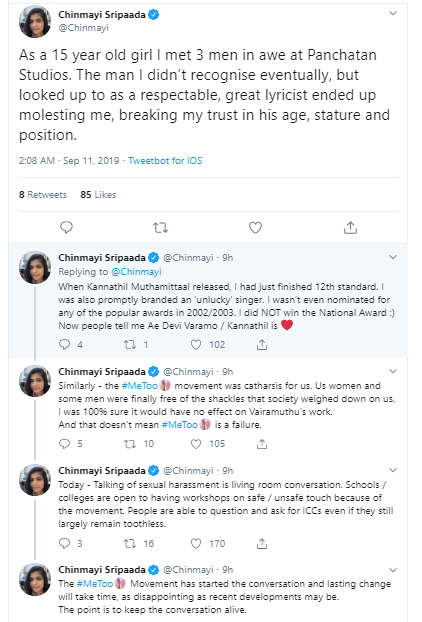