A musical celebration that simply must not be missed!

The #KingOfVeena - Kalaimamani Rajhesh Vaidhya, the man known for redefining the Veena instrument in his way, is set to set the fire on stage with the sound of the Veena playing on December 2022.
​
Spearheaded by Mediaberg Productions, the Veena Player, Rajhesh Vaidhya brings his unique brand of rhythm and soul to Malaysia! What makes the much-awaited concert enthrall the audiences?

Touted to be the first fusion music concert in Malaysia, the go-to veena player is about to perform more than 200 songs that moved the Indian cinema, as well as hand-picked songs that will leave us spellbound with his fabulous talents. On top of that, he will perform live with his touring band, which comprises musicians such as Kartick Devaraj on the keyboard, Keith Peters on bass guitar, Kumaran on Drums, Praveen on Tabla, Sai on Gatham, and many more on the list.

Speaking to Astro Ulgam, the organisers confirmed that the concert-goers could anticipate two segments throughout the show, and the second segment needs a special mention in this article. From playing our renowned Malaysian songs in languages such as Tamil, Malay, Chinese, etc; the accomplished veena player will be breaking yet another new world record by playing 100 songs in 100 minutes exclusively in Malaysia. It's going to be a spice-up segment that literally gives you goosebumps!

Born into a rich musical environment, Vaidhya inherited his indigenous talents from his father, Sri K.M. Vaidyanathan, an icon in the world of the music industry, especially on the mridangam and ghatam.
As part of his blistering speed, the maestro entered Asia Book Of Records (2001) through the critically acclaimed ‘Do you Have A Minute Series’ where he performed One Song, One Minute, One Day. This series of one-minute versions of classics and hit songs across genres, languages, and continents has over 10 million views across all social media platforms. 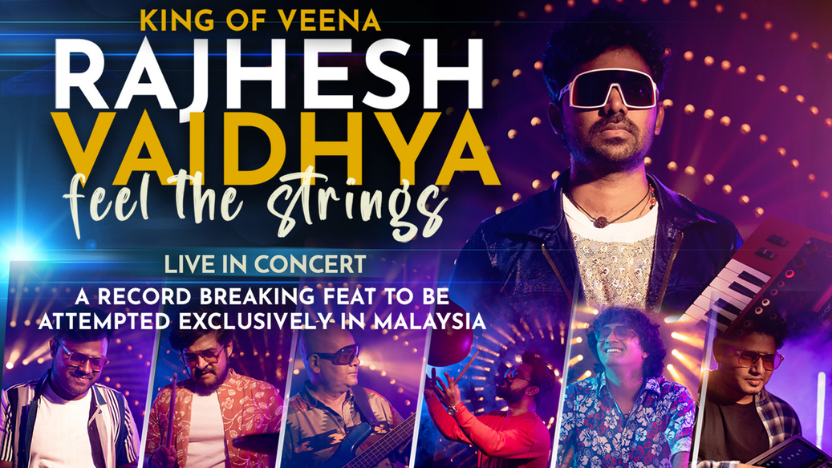 Before setting the stage on fire with the spectacular show, the organiser has also shared an interesting piece of news, where there’ll be an exclusive session via Mediaberg’s Facebook page for the audience to request their favorite songs that they would like to listen live during the concert. Isn’t that pretty cool?

Being a die-hard fan of Rajhesh and keen to witness a fabulous full-scale concert experience, head on to the Ticket2U site to purchase your tickets now!