The Inspiring Life Story Of Vivek, A Socially Responsible Actor!

Actor Vivek's life story is an inspiration to many.

SIDAMBARAM, Kirthiga
Born as Vivekanandan in a small village called Perumbathur in the Thenkasi district, Vivek first began his journey in the world of comedy as a stand-up comedian at the Madras Humour Club. While working at the secretariat in Chennai, he won the Best Entertainer Award several times for his performances.

During one of his stand-up comedy sessions, the actor was spotted by the legendary director K. Balachander. Initially, Vivek was offered the position of an assistant writer to K. Balachander for the film Manathil Uruthi Vendum. However, as the director was looking for a fresh face to play actress Suhashini's younger brother, Vivek was cast.

Becoming an actor was never Vivek's plan. After his debut film in a small role, Vivek was once again cast in K. Balachander's 'Pudhu Pudhu Arthangal' which became a turning point in his life.

His dialogue 'Innikku Setha, Naalikku Paalu' was such a hit that it's even remembered to date. Vivek's comedy in films like Oru Veedu Iru Vaasal, Puthu Puthu Payanam, and Naan Pesa Ninaipathellam strengthened his fort in Tamil cinema.

Eventually, the comedian was cast with famous lead actors like Rajinikanth, Prasanth, and Ajith. The 1990s and 2000s were Vivek's glorious years.

He won numerous awards and accolades for his comedy over the years. The comedian won three Filmfare Awards for Best Comedian in Tamil for Run (2002), Saamy (2003), and Perazhagan (2004).

Vivek's comedy often revolved around a social cause that was highly admired by his fellow comedians in the industry. He challenged social norms and took a jab at superstitions and old rituals in some of his films.

It was said that securing Vivek's call sheet at that period ensured the success of a film. Such was his popularity and influence in Tamil cinema.

After 34 years of entertaining countless fans, Vivek has left us shocked and heartbroken with his unexpected passing. Fans and celebrities are still struggling to accept that the actor's no more.

Vivek was a close friend and confidant of former Indian president late APJ Abdul Kalam. To fulfill his request, Vivek began a campaign called the Green Kalam Project intending to plant 1 crore trees. Sadly, the actor has passed away without achieving his lifelong dream.

The 59-year-old is survived by his wife and two daughters. Back in 2016, Vivek lost his only son Prasanna to brain fever. Our deepest condolences to the family. May his soul rest in peace. 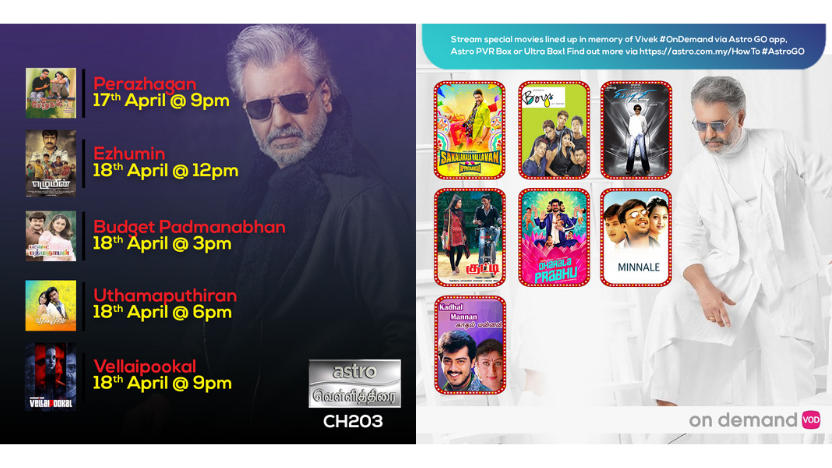