Lakshmi Menon Asked to Leave Cinema! This is Her Angry Response...

Lakshmi Menon Asked to Leave Cinema! This is Her Angry Response...

SIDAMBARAM, Kirthiga
Actress Lakshmi Menon was once a well-known talent in Kollywood. Even Sify labeled her as the "the fastest rising star in Tamil cinema". She starred in critically-acclaimed and hit films one after another. The actress even received Tamil Nadu State Film Award for Best Actress two times for Kumki and Sundarapandian.

However, her stride towards success as an actress didn't last long. She was typecasted as a girl-next-door. Tired of acting in similar roles, Lakshmi Menon took a 5-year hiatus from her film career to focus on her studies and classical dance training.

Recently, Lakshmi Menon became active on social media and posted a few pictures from her latest photoshoot, possibly hinting a comeback to films.

But, one of her fans has deeply upset the actress by sending a private message after looking at the recent photoshoot. The message read: "Looking awesome, better get married to someone. Please Live a peaceful life. Leave cinema please. You are an angel, live like that."

Annoyed by the message, Lakshmi posted it on her Instagram story and responded with a sarcastic comment. Take a look: 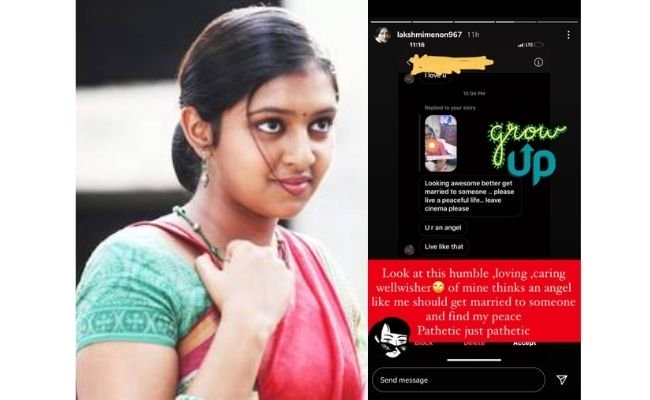 Well, the actress sure is bold in standing up for her. We can't wait to see her on the big screen again!