Revathi
"The human spirit is one of ability, perseverance and courage that no disability can steal away," goes a quote by Indian entrepreneur Harsh Mariwala.

Nisshaa Muniandy is a living testatement to this.

The 25-year-old lives with debilitating combination of dystonia and epilepsy, but she's not letting that get in her way of acquiring education and living live to the fullest.

To the uninitiated, dystonia is a movement disorder that causes involuntary muscle contractions, while epilepsy is a neurological disorder in which brain activity becomes abnormal, causing seizures, among others.

Speaking to Astro Ulagam, Nisshaa said the onset of dystonia began when she was just six, but was only officially diagnosed with the condition when she was 17. In addition, she was also found to have epilepsy when she was 10.

"You have to live life no matter what. You can cry for me, but that doesn't change anything," said Nisshaa, the eldest of three siblings. She has two younger sisters.

According to her, her parents' morale was down when she was first diagnosed with the condition. However, when they saw how tough and unrelenting she was in leading a normal life, they too, rose to the occasion. Now, her family are her strongest pillar of support. 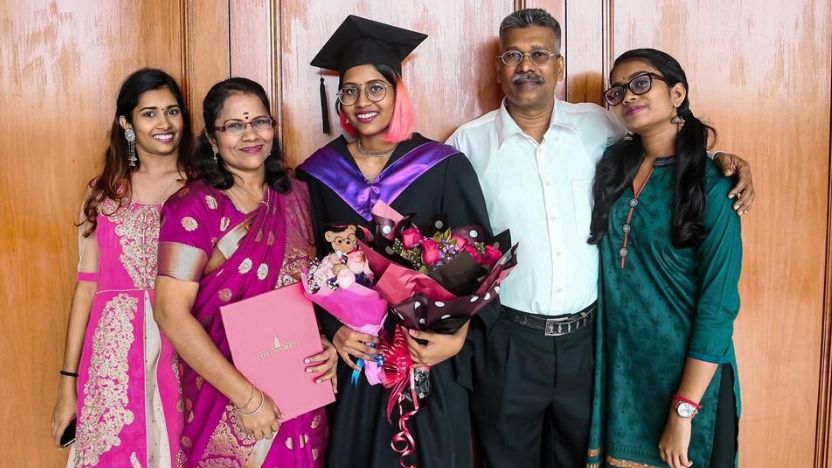 Nisshaa said that her dystonia symptoms have worsened over the years. Among others, it limits her ability to do daily chores, like sitting and standing for a prolonged period of time, and she experiences pain in her limbs daily.

However, the bold woman has learned to accept and live with her condition. She is currently pursuing her Master's degree in English language studies in Universiti Malaya. She also goes for walks daily, and even drives.

Before the lockdown during the pandemic began, Nisshaa recalled getting weird stares from people when she was out in public. Her family members often act as her shield, at such instances.

She admits that she sorts of "enjoys" being confined to home during the current lockdown, as she gets to avoid such rude stares.

Besides taking her Master's degree, Nisshaa also runs a Facebook page called The Unique You, which enables individuals to share their experiences of living with disabilities, among others.

Nisshaa admits that her condition has given her a different outlook on life, in a sense that she appreciates what she has been given, including friends and the chance to meet new people.

Very inspiring indeed, Nisshaa. You truly are an inspirational young woman! Keep fighting the food fight and keep inspiring others.

Meanwhile, you can watch her interview with Full Front TV below: