'Pattas' Actress Mehreen Pirzada Called Off Her Engagement With Politician!

Actress Mehreen Pirzada and her fiancee Bhavya Bishnoi called off their engagement. Here's what they posted on their social media handle...

Mehreen Pirzada is a popular Indian actress who predominantly works in Telugu, Tamil, Punjabi and Hindi. The actress who made her cinema debut in 2016, recently worked in the Dhanush starrer 'Pattas'.

The actress got engaged to politician Bhavya Bishnoi, the grandson of Haryana's former Chief Minister in a grand and lavish function in March 2021. The couple, however, postponed their wedding to later this year due to the Covid-19 pandemic.

Now just four months after their engagement, the actress took social media to announce their break-up.

She posted that the decision was taken amicably and in the best interest of both parties. She further added that she will not have any association with her ex-fiancee, his family members and friends. This is what the actress posted: Her ex-fiancee Bhavya made a similar announcement and cited differences in values and compatibility, and that he's walking away with no regrets. Check out his announcement here: 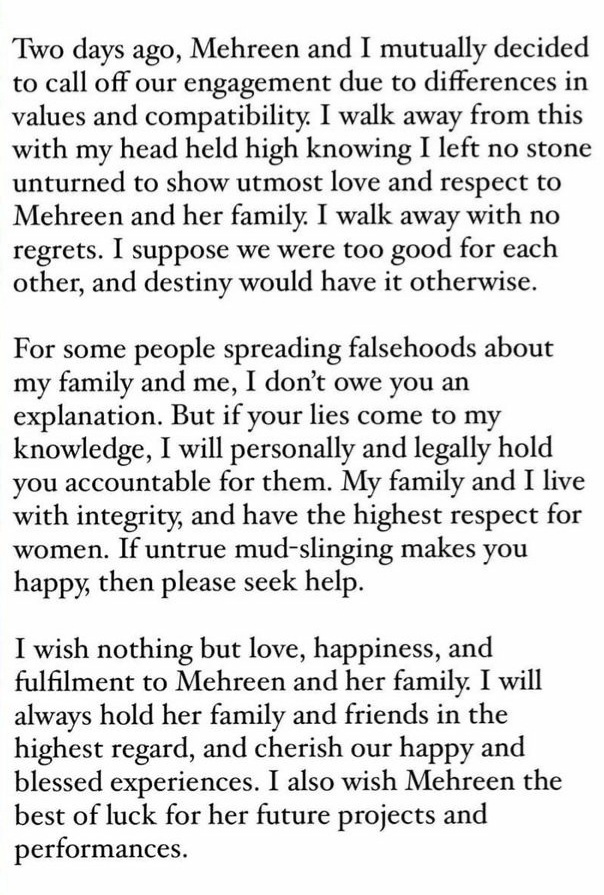