It's Ulaganayagan Kamal Hassan's 65th birthday and his entire clan has gathered in his hometown Paramakudi for the start of the celebration.

The legendary actor unveiled a statue of his late father Srinivasan as it happens to be his death anniversary. His father was a lawyer and a freedom fighter during his lifetime.

In the photos released, Kamal's daughters Shruti Haasan and Akshara Haasan, elder brother Charu Haasan, his wife and daughter Suhasini Mani Ratnam can be seen but there was also another familiar face spotted. It's none other than the actor's Viswaroopam and Uthama Villain co-star actress Pooja Kumar. Take a look: 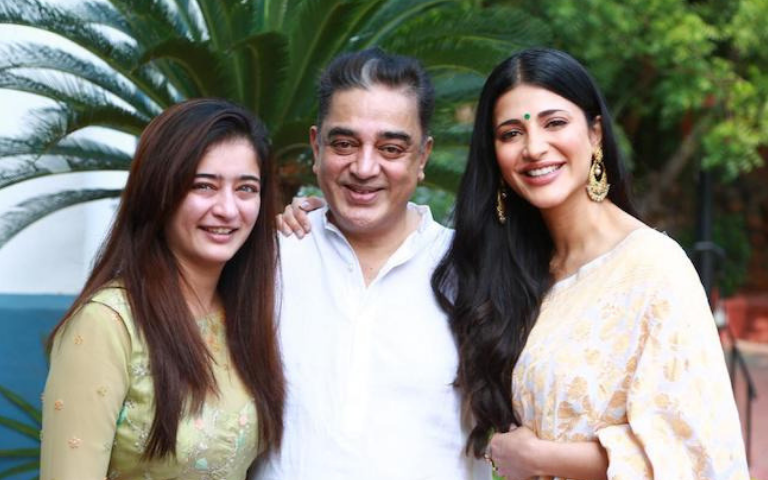 Netizens are surprised to see the actress in Kamal Hassan's birthday celebration with his family. Even after the completion of the films, Pooja Kumar has been seen tailing Kamal to events now and then.

We are not sure what's brewing between the duo but as it's Ulaganayagan's born day, his fans have only been posting birthday wishes and sharing their love for the star. Tweets related to Kamal Hassan are flooding on Twitter and secured at least the Top 5 Trending hashtags.

This year, the actor will also be celebrating his 60 years of cinema journey as he started as a 4-year-old child artist. A special star-studded celebration named 'Ungal Naan' has been planned in Chennai and is expected to feature the likes of Rajinikanth and Vijay. Musical maestro Ilayaraja himself is reportedly orchestrating a musical performance.