Is Simbu-Hansika's Upcoming Film in Trouble? Producer Explains the Truth...

SIDAMBARAM, Kirthiga
Simbu and Hansika are popular South Indian actors, who dated shortly during the release of their movie 'Vaalu' in 2015. However, the couple parted ways later on, and 'Vettai Mannan', a movie they were supposed to pair up as the lead, got shelved following their break-up.

Back in 2019, Hansika revealed that Simbu will be playing a cameo role in her upcoming movie 'Maha', and the first look poster was released at the same time. Stills from the movie went viral on social media at the time.

Despite wrapping up the shoot in February 2021, the film's release date hasn't been finalised. Recently, it was rumored that the Madras High Court has ordered a stay on the release of Maha. However, the film's producer Mathiyazhagan addressed the rumor by releasing a statement.

In his statement, he mentioned that Maha's director UR Jameel brought up tiny issues and filed a case to stop the release of the film. But the court didn't grant an order of stay on the film. The case will come up for another hearing in the first week of June. 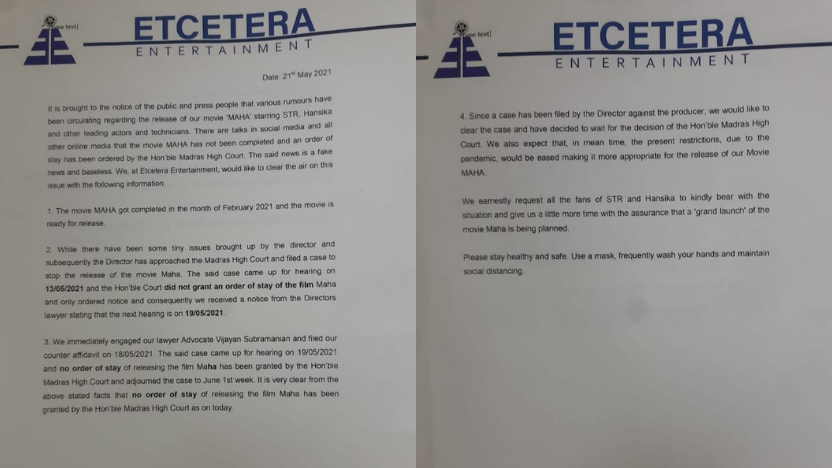 According to India Today, UR Jameel claims that 'nine days of shooting is still pending' and he accused the producer of using another team to complete the shoot without his knowledge.