Usher The New Year With An Exciting Line-Up On Astro

Check out these amazing local and international movies, and fun-filled shows coming your way in conjunction with Puthandu, Vishu, and Vaisakhi on Astro...

mag
Check out these amazing local and international movies, and fun-filled shows coming your way in conjunction with Puthandu, Vishu, and Vaisakhi on Astro: 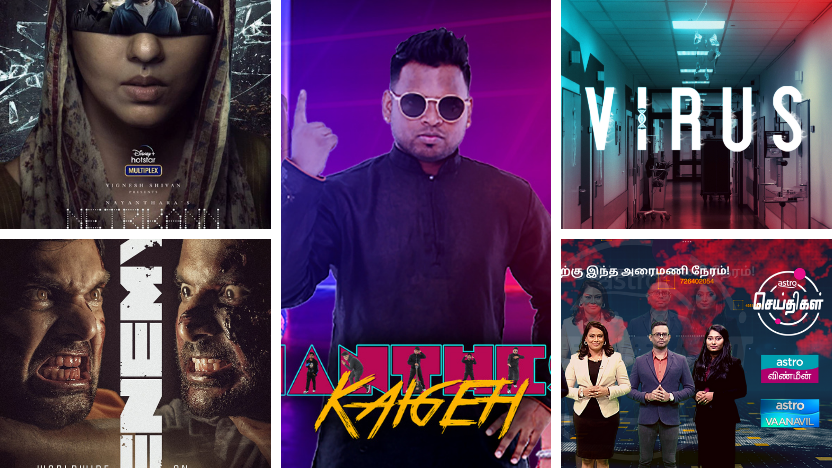 Santesh Kaigeh | 13 April, 9.30pm
Stream anytime on Astro GO and On Demand
Malaysian singer Shantesh gets together with fellow celebrity musicians for a remarkable jamming session consisting of trending Kollywood and local songs.

Annabelle Sethupathi | 16 April, 10.00pm
Stream on Astro GO
Rudra, a small-time burglar gets into a palace full of ghosts. Along with the ghost, she finds out the mystery about the owner of the palace- Annabelle Sethupathi. Starring Vijay Sethupathi, Taapsee Pannu, Jagapathi Babu, and Yogi Babu.

Netrikann | 17 April, 10.00pm
Stream on Astro GO
A cat-and-mouse game gets intense between a blind woman and a serial killer when the former becomes the witness of a kidnap performed by the latter. Starring Nayanthara, Ajmal Ameer and K. Manikandan.

Virus | Monday to Friday, 9.00pm
Stream anytime on Astro GO and On Demand
A group of medical staff combat the spread of the Enza-R virus that causes patients to suffer from insufficient oxygen levels. Whether the outbreak is an accidental act or linked to terrorism forms the crux of the story.

Astro Seithigal | Monday to Friday, 8.30pm
Stream on Astro GO
Refreshed news and current affairs show featuring new segments including a weekly segment rounding up the main highlights of the week; and a special report segment showcasing events that impacted local communities along with a fresh news presentation set-up. Motu Patlu In Double Trouble | 14 April, 3.30pm
Stream anytime on Astro GO and On Demand
Inspector Chingam is being forced to marry, but his bride has been kidnapped by some local goons! While Motu and Patlu are trying to save the bride, their identical twins are trying to save an important mission file from an evil scientist who wants to destroy the world.

Kuruthi | 15 April, 9.00pm
Stream on Astro GO
Ibrahim, a widower, grieves the loss of his wife and child and lives in a secluded area. However, his life turns upside down after a policeman comes knocking at his door with a criminal. Starring Prithviraj Sukumaran and Roshan Mathew.

Sufna | 16 April, 2.00pm
Stream on Astro GO
Jeet, a carefree young man, and Teg, a poor labourer, fall in love with each other. However, they face several difficulties to maintain their relationship. Starring Ammy Virk and Tania.

Surkhi Bindi | 17 April, 2.00pm
Stream on Astro GO
Raano, who nurtures a dream to migrate to Canada, is forced to marry Sukha. With her husband's support, she opens a beauty parlour to save the required money, unaware of what lies ahead. Starring Sargun Mehta, Gurnam Bhullar, Rupinder Rupi, and Nisha Bano.

Arinthathum Ariyathathum | 14 April
Stream anytime on Astro GO and On Demand
An informative show with fascinating facts about the Tamil language.

New Year Specials On Other Channels: Pattimandram | 14 April, 9.00am | Zee Tamil HD CH223
Stream anytime on Astro GO and On Demand
A traditional debate show with an entertainment flair, moderated by Suki Sivam, a famous Tamil orator, writer, scholar, and the winner of the prestigious ‘Kalaimamani Award’.

Aaha Kalyanam | 14 April, 3.30pm | Zee Tamil HD CH223
Stream anytime on Astro GO and On Demand
A fun celebratory show with 4 newly married couples from popular series including Anbu Selvi and Nalla Sivam from ‘Anbe Sivam’, Radhika and Aravind from ‘Rajini’, Vaanathi and Kartick from ‘Peranbu’, and, Vidhya and Sanjay from ‘Vidhya No 1’. The couples and families come together in this special show to celebrate this auspicious day with joy and fun.

Pushpa | 14 April, 7.00pm | Star Vijay HD CH221
Stream on Astro GO
A laborer named Pushpa makes enemies as he rises in the world of red sandalwood smuggling. However, violence erupts when the police attempt to bring down his illegal business. Starring Allu Arjun and Rashmika Mandanna.

Sarpatta Parambai | 14 April, 9.00pm | Vellithirai HD CH203
When Sarpatta Parambarai is challenged to a do-or-die match, will Kabilan, a young labourer, put on the gloves himself and lead his clan to victory, or be dissuaded by his disapproving mother and dangerous politics? Starring Arya and Pasupathy.

Radhe Shyam | Premiere on 14 April | Astro First CH480
The story attempts to drive home a point that no science is absolute and 100 percent accurate; and that there’s always a small but bright chance to change your destiny with karma. Starring Prabhas and Pooja Hegde.

Carbon | 15 April, 9.00pm | Vellithirai HD CH203
Available on On Demand
A man with a special ability tries to discover the identity of a mysterious hit-and-run driver who has put his father in critical condition. Starring Viddarth and Dhanya.

Antim: The Final Truth | 15 April, 9.00pm | BollyOne HD CH251
Stream anytime on Astro GO & On Demand
A farmer’s son is forced to leave the village and move to the city, where he soon becomes a dreaded gangster and crosses paths with a fearless cop determined to eliminate criminals. Starring Salman Khan, Aayush Sharma, and Mahima Makwana.
#show#Entertainment#Astro#astroshows#chithiraiputhandu#puthandu#vaisakhi#vishu