Sanam Shetty has come out to give an interview about Tharshan and their relationship.

Sanam Shetty is a model, actress and pageant title-winner who has hit headlines recently because her alleged beau Tharshan who joined Bigg Boss 3.

While Tharshan has been making a name for himself in the house by fighting the dominance of Vanitha this week, Sanam Shetty has come out to give an interview about Tharshan and their relationship.

Day 10 today!! Woah!! And uv already conquered all our hearts @tharshan_shant ❤❤ Missing our coffee times? I'm sure ur missing ur coffee there too? Stay well Tharshan. Ur a winner! ?? Do u folks agree? #bigboss3 #tharshanarmy #bigbosshouse

When asked if she's in love with Tharshan, Sanam decided to play safe by saying they are very close friends who support each other. Curious to know if they are in a committed relationship, the host further pushed her for answers by asking if Tharshan's in love with her.

"You should ask Tharshan about it. Ask him once he's out. We'll see what he says," Sanam laughed.

On the first day of Bigg Boss 3, Sanam was there with his friends to support Tharshan as she feels Bigg Boss is a big platform for him and his career. Even the stunning model-turned-actress was approached by the Bigg Boss crew at first!

"I was approached by Bigg Boss but obviously I was not in the final selection list. We'll see what will happen. Future is full of surprises. you will never know," she said. 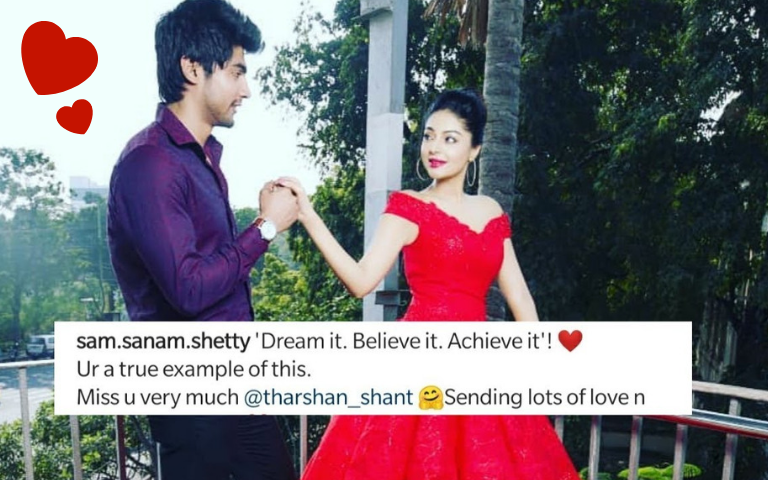 "They (Bigg Boss crew) will have a mindset on what kind of contestants they want. As for Wildcard entry, if I fit into their expectations, they will definitely call me. I'll have to wait," she explained.

'Dream it. Believe it. Achieve it'! ❤ Ur a true example of this. Miss u very much @tharshan_shant ?Sending lots of love n light from all of us❤ #bigbossseason3 #tharshanarmy #goodmorning

Talking about her favourite contestants in the Bigg Boss house, Sanam reveals there's no one but Tharshan!

"100% only Tharshan. In my opinion, there's no contestant in the house who can match him. I think many people share my opinion. So, it's only Tharshan for me!" she exclaimed.

Watch the full interview and her photoshoot here: