SIDAMBARAM, Kirthiga
Hindu astrology is an ancient system of predicting human affairs by studying planetary positions and movements. There are nine known planets (known as 'navagrahas' in Tamil) in Hindu astrology with different functions; Sun (Suriyan), Moon (Chandran), Mars (Sevvai), Mercury (Budhan), Jupiter (Guru), Venus (Sukran), Saturn (Sani) and shadow planets Rahu and Kethu. In Tamilnadu, each of the navagrahas has its own shrines. According to a legend, the grahas were cursed with leprosy and banished to a place called Vellurukku Vanam or the white wildflower jungle on earth by Lord Brahma (God of Creations). They worshipped Lord Shiva for redemption and in return, Shiva assured them that the place, now known as the Suryanar temple, is actually theirs and tasked them to bless devotees who seek their grace.

Known as the navagrahastalam, the cluster of temples are located near Kumbakonam, Tamilnadu. Except for the Suryanar Temple, which is dedicated to the Sun God, all eight temples are actually dedicated to Lord Shiva with the grahas serving as attendant or secondary deities. 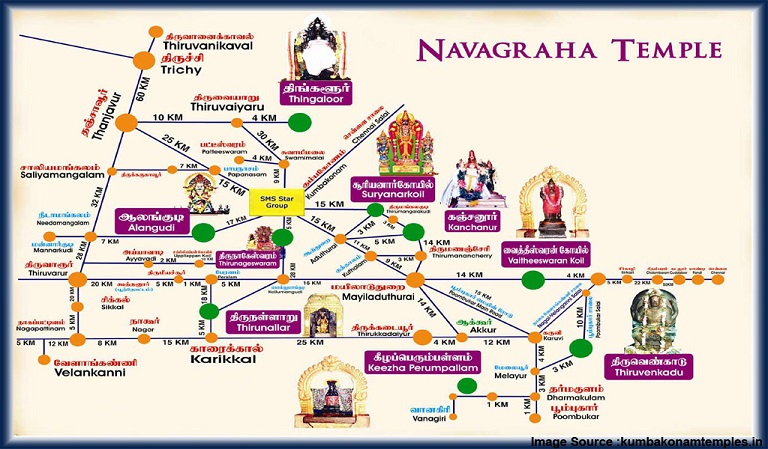 Here's the list of the temples dedicated to the grahas:

Every year, local and foreign tourists take up the 'Navagraha Tour' to seek the blessings of the navagrahas and hope to ease the hardships in their lives. There are different types of packages, from day trips to overnight trips, offered by the local operators. You can also opt out to follow your own itinerary and take public transport to the temples.

For starters, why don't you watch the video to find out more about the navagrahastalams before you plan your journey:


You Might Be Interested:
What is the 7.5 year cycle of Sani and How to Reduce the Effects?
The Significance Of Tying 3 Knots In A Hindu Marriage
Water disruption in Klang Valley on 24th April
Sree Abiraame Won 5 Gold Medals for Malaysia!