The Barnum Effect: Why Do People Believe in Astrology?

Have you heard of the Barnum Effect, which is closely related to people's tendency to believe in astrology? Learn more about it right here!

Many people have clearly grown more fearful and restless due to the COVID-19 pandemic, becoming reliant on astrologers for a sense of security and guidance. However, astrological beliefs are often linked with a psychological phenomenon known as the 'Barnum Effect.'

The Barnum Effect explains why people consider extremely generic statements from personality tests or horoscope readings to be so personalised. The word 'Barnum' originated from P.T. Barnum, a well-known 19th-century showman and businessman renowned for his con artist talents. Using this effect, he persuaded others that he knows them better than they do themselves.

In 1948, psychology professor Bertram Forer ran a personality test study with his students. Subjects were given a set of questions to answer and told that their answers would be assessed separately and provided feedback. However, after the test, Forer copied lines from a newspaper's astrological section that described their personality.

The professor then asked the students to score the accuracy of the test on a scale of one to five, with one being the least accurate and five being the most correct and found an unusually high average score of 4.26.

This suggests that people believe in such generalisations because of a "combination of wishful thinking and hopefulness." Simply put, we only believe what we want to believe, and astrologers are likely profiting from our gullibility or need for personal validation. 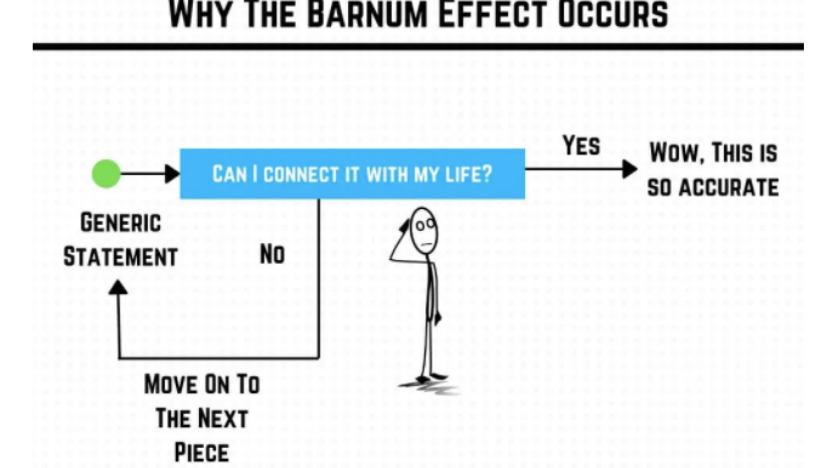 Statements such as "You are analytical, and value reasoning above emotions" or "Patience is your biggest attribute" may apply to many people. However, individuals who read these words, particularly when checking their horoscopes, tend to feel that the statements are accurate descriptions of themselves.

In some cases, people make major life decisions based on broad claims, which can have serious consequences. Horoscopes play an essential role in Indian weddings, and parents make marital decisions for their children based on the advice of astrologers.

Back in 2021, a 19-year-old Keralite woman named Suchithra married off early after an astrologer advised her parents. Suchithra died months after her wedding, allegedly due to dowry harassment. This is just one of many vivid examples of the dangers of blindly trusting horoscopes.

So, the next time you come across a horoscope reading that claims to predict your destiny, think twice. Don't fall prey to the Barnum Effect!