As of timings and date of Bhogi Pongal 2023:

What is Bhogi Ponggal?

Even though Ponggal festival is mainly celebrated for the Surya Bhagavan (God of Sun), yet the festival begins with the celebration of Bhogi Ponggal. Bhogi is celebrated to honour Lord Indran (God of Heaven), who commands lightning, thunder, storms, rains and river flows. On this day, the farmers pray to Lord Indran with the belief that he will bestow abundance of harvest and prosperity to their land.

Bhogi is observed during the last day of Margazhi, a day before the transit of Sun which signifies the change of weather from cold to warm.

On this day, family members come together to clean their house thoroughly and prepares to get rid of the old and unused stuffs. At the same time, the house is decorated and preparations are taken care of for the Thai Ponggal celebration which falls on the next morning. During the dawn, it is customary to burn these old things with the belief ‘Pazhaiyana Kazhithalum, Puthiyana Puguthalum’, which symbolizes discarding unnecessary things and thoughts, to pave way for the new ones. Thus, the collected unused items are thrown into the bonfire, while they sing and dance in the praise of Lord.

In those days, agricultural wastage and firewood are burnt during Bhogi as it helps to keep the farmers warm during the last lap of winter (marghazhi). However, over time people have started burning unwanted items such as furniture, clothes, plastics, tyres and tubes which leads to air pollution. 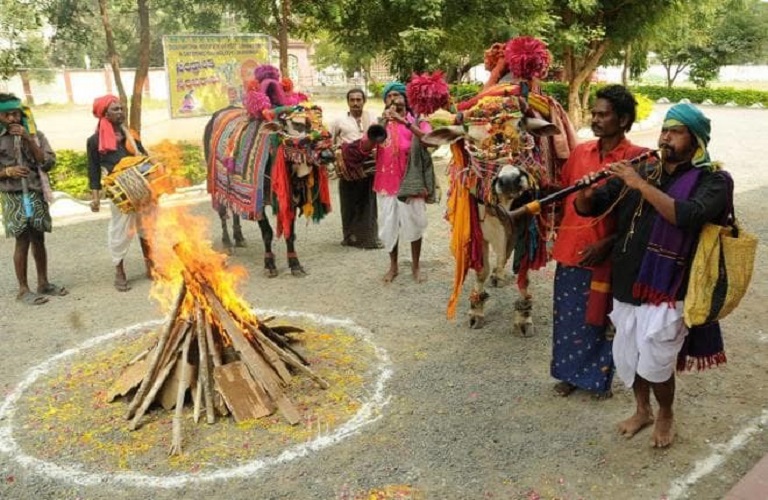 Thus, most of the younger generation these days oppose these practice as many believe one man's trash is another man's treasure. They encourage donating unwanted stuffs like clothes and furniture to the needy instead of tossing it into the fire.

In addition to that, there are also awareness campaigns that are being conducted to educate people on the effect of open burning towards our environment and how avoiding plastics and tubes helps to reduce massive air pollution.

Bhogi marks the end of the Marghazhi and Thai month begins the next day!