A Muraly's life story plays out like a Tamil movie - an angry young man ends up behind bars after getting on the wrong side of law. After he comes out, he reforms himself, and tries to give back to the society.

Shuman
A Muraly's life story plays out like a Tamil movie - an angry young man ends up on the wrong side of the law, and ultimately, goes behind bars.

However, the ending here is a happy one, unlike most stories where the ‘bad guy’ ends up in the slammer, or worse, the morgue.

In the darkest moments of his life, Muraly managed to claw his way back into the light. Today, the 51-year-old has founded, and runs an NGO called "Thamilar Uthavum Karangal", which performs charitable deeds, such as donating food, cash and other necessities, to the needy on a regular basis.

Among the group's "trademark" event is carrying wheelchair-bound people up the Batu Caves Temple’s 272 stairs every year. Muraly, who also gives talks to students about the importance of staying off crime - which robbed six precious years of his life, spoke to Astro Ulagam about the story of his life.

It was 1990 and 19-year-old Muraly, who had dropped out of school when he was in Form 5, was helping his father run the family's meat stall at the Selayang market.

Following a misunderstanding, he stabbed a trader, who ended up in the Intensive Care Unit.

Afraid of repercussions, Muraly went into hiding and soon fled to Singapore. He later returned to his old turf, hoping his past follies had been forgiven and forgotten.

The "fear" he saw in the eyes of the people who knew about the stabbing fueled his lust for violence and soon, he was back to beating and chopping people up at the slightest provocation.

It did not, however, last long. At the age of 22, the law caught up with him, and he was detained under the Emergency Ordinance (EO) after being branded "Ketua Samseng".

He was sent to Pulau Jerejak, Penang, before being shipped out to the Simpang Renggam detention centre in Johor shortly after.

The imprisonment did not put Muraly off violence.

He was involved in numerous fights while in prison, even with prison guards. He even beat an inspector on duty once.

The latest episode resulted in his receiving "the beating of my life", he recalls, adding that what was supposed to have been 2 years in detention under the EO became six, due to his conduct behind bars.

He was also thrown into solitary confinement after the latest episode.

This period of suffering, during which he recalls having to eat off a plate pushed into the cell from underneath a steel door "like a dog" as he could not move any of his limbs from the beating, got him reflecting on his past deeds and his life.

It was the exact moment he realised he needed to turn his life around, for the better.

Upon his transfer to the normal cell, he started asking for books to read from the prison officers. Among content he "voraciously" consumed were on Nelson Mandela and The Liberation Tigers of Tamil Eelam (LTTE) chief V Prabhakaran, and their respective sacrifices.

Soon came his release and having been inside for six years, he couldn't even recognise the way to his family home in Petaling Jaya, thanks to urban development.

His family accepted him, but out of "guilt", he kept his distance, even from his parents.

A trip to the Batu Caves Murugan temple provided the turning point in his life.

"I saw a wheelchair-bound man praying from the foot of the hill and it got me thinking about how they can possibly never see what's inside the cave temple.

"I called four of my friends 'for a job', and they rushed there, thinking I was in trouble, and wanting to bail me out. However, I told them we were going to carry the man up the 272 stairs, and they obliged," he recalled. The following year (1999), Muraly gathered 200 men to carry 50 wheelchair-bound people up the same flight of stairs.

It was in conjunction with his father's birthday, and it was the first time he heard his old man tell people how proud he was to have Muraly as his son.

The wheelchair-carrying activity has since become an annual event, and in January 2019, Thamilar Uthavum Karangal celebrated the event's 20th anniversary.

The NGO has more than 700 members nationwide, and some of them are convicts, who like Muraly, have turned over a new leaf.

The Astro Uruthunai Award recipient now frequently works with the police, whom he once ran away from, to conduct crime prevention campaigns.

His advice to youths today: Stay off crime, at all costs!

"We can't choose our parents, but we can choose our friends. Unite with your friends to do good, and not bad things.

"Crime is a one-way street. Those who live by it, either end up behind bars, or dead. Nothing good comes out of being a criminal," he says.

Having one end up as a criminal is equally painful for the person's family, as it is to the individual, he adds.

"I also tell the students I speak to that a mother can cry while giving birth, but not for giving birth to someone. 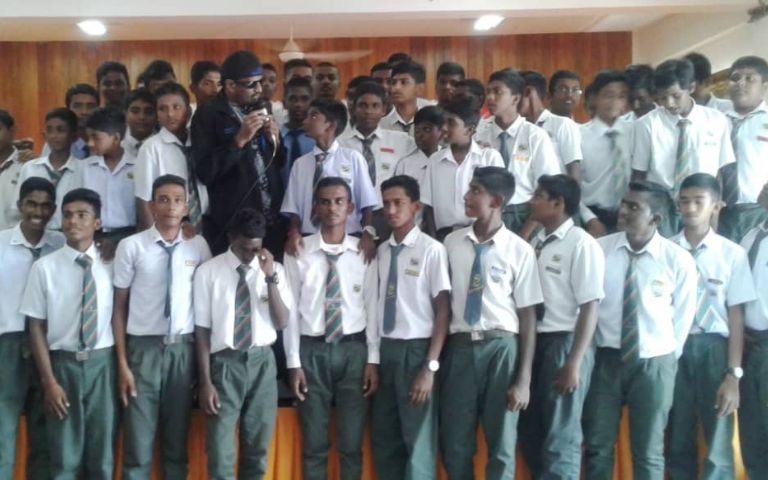 "I speak from experience, witnessing how my parents reacted when the police first picked me up," he recalls.

He also cautions them to not act on impulses, as "commanding respect is more important than commanding fear".