Local designer Pavithra Varathan has come up with an exclusive Merdeka Saree in conjunction with the country's 63rd independence, and to honour frontliners who defended the country during the COVID-19 outbreak.

As the country still grapples with the COVID-19 pandemic, Pavithra Varathan of local designer brand ZOBHA, has released an exclusive Merdeka saree in conjunction with Malaysia's 63rd independence, which also pays tribute to the frontliners who held the fort during the pandemic.

Speaking to local lifestyle website Likely, Pavithra said she was moved to design the Merdeka saree to inspire unity among Malaysians.

"I was deeply disturbed by the current situation in Malaysia, both with the unfortunate [COVID-19] outbreak and the subsequent social issues involving injustice and racial barricades.

"My inspirations were weaved in the saree to remind our nation about the significance of Merdeka – that it is where unity and strength lives within us as Malaysians. Just like the lyrics in the Jalur Gemilang song; ‘satu suara, satu semangat’ we march forward together, making the country a better place for all," she was quoted telling the portal.

The exclusive Merdeka saree, made of Kanjivaram silk, incorporates the design of the national flag Jalur Gemilang, the country's "Father of Independence" Tunku Abdul Rahman, as well as the capital city Kuala Lumpur's skyline.

According to Pavithra, the (photo and video) shoot for the Merdeka saree campaign involved models and personalities from various races, all of whom said they felt very comfortable in the saree.

Besides the Merdeka saree, ZOBHA (which means elegance in Sanskrit) has also released a series of sarees to honour frontliners who gave their all to defend the country during the COVID-19 outbreak.

Among those are sarees inspired by the national uniforms of the Malaysian Army (with green saree), medical personnel (white saree), the police (blue saree with silver patterns), and the fire and rescue services department (orange and gold saree). 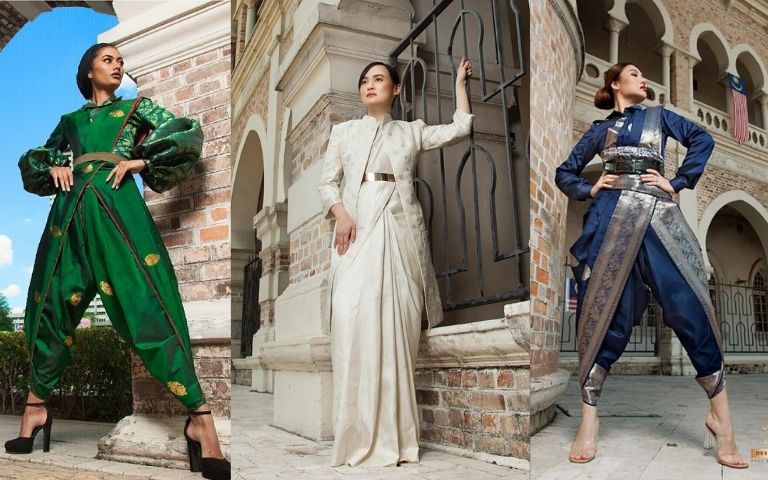 Pavithra told Likely that the ZOBHA Merdeka campaign is aimed at reminding Malaysians to stand unified and stronger together.

"When there are people who are left unaware, it is up to us to also address the issue together so that we can educate and grow together as a nation," she said.