Chelvi Krishnan
Mauritius has always been known for its spectacular beaches and as a cultural melting pot of Indian, Chinese, British, French, and African influences. The peaceful coexistence among its people has created a friendly society, with its diversity adding colour through various cultural activities and religious festivals.

While the festival is celebrated across the country, the grandest one is always at Kovil Montagne (Sri Siva Subramanya Thirukovil). Nestled in Corps de Garde Mountain in Quatre Bornes, it was founded in 1890 by a humble and pious Indian immigrant, Velamurugan. He was a typical example of a true devotee in search of the divine through the grace of Lord Murugan and built the temple with every penny he saved working as a labourer.

Today, Thaipusam in Mauritius is celebrated with thousands of attendees. It is held to show gratitude and affection to the Goddess Parvati and Lord Murugan, who defeated the evil demon Soorapadman. It’s is also the day when Lord Murugan received his Vel (Divine Spear). 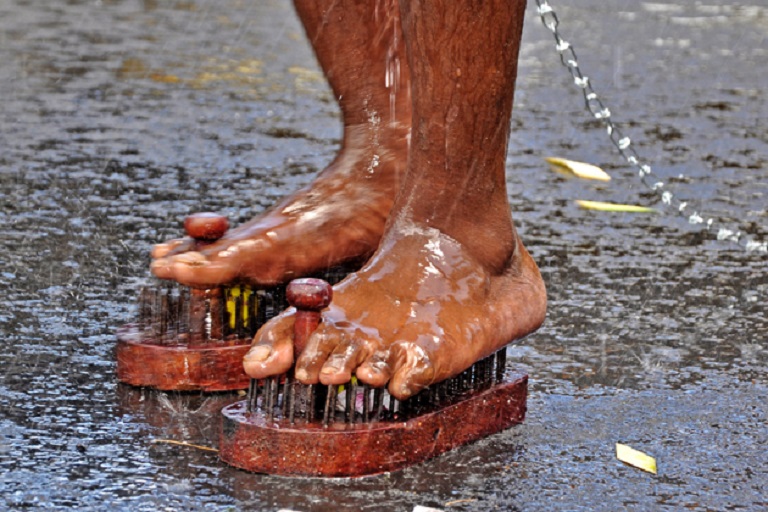 To kickstart the festival, a flag hoisting ceremony known as Kodi Etram takes place. It consists of an incantation, devotional music and pomp and happens about ten days before the celebrations begin. Rituals are performed in temples around the country, and the flag will remain flying until the festival ends. Devotees observe a strict 10-day soul cleansing period of purification; fasting, penitence, prayers and observing a rigorous vegetarian diet. Prayers and texts from Hindu scriptures are read daily at home and temples for the purgation of passion and desire.

Some of the spectacular parts of the celebration include fire-walking, walking on the top of the sword and bearing Kavadis. The kavadi is associated with the Tamil legend and story of Idumban, a reformed bandit and a disciple of Agasthiyar. Idumban was asked by his guru to fetch two mountain peaks and attach them to the ends of a kavadi, which is a pole used to carry loads. Upon the reaching the peak of Palani Hill, Idumban spotted a young boy and demanded that he vacate at once to proceed with his task. The boy, none other than a Lord Murugan himself, who was in a fighting mood, refused. A fierce battle began and Idumban was slain.

Saint Agasthiyar and his followers prayed for the resurrection of Idumban. Their wishes were granted by Lord Murugan. It is believed that devotees who carry their Kavadi to the temple will also have their wishes granted. In modern times, devotees make their own Kavadi. An arched bamboo structure, it is firmed with rods and decorated with flowers, coconut leaves, lime, peacock feathers, and other adornments, with pots of milk hanging at each end. Most devotees have their cheeks and tongue pierced through vels (spear) while bearing the kavadi. Millions of Hindus around the world contemplate on their inner self and devote their time to spiritual practice and their beloved Lord Murugan during this special celebration.