Eight Ill-Effects of Excessive Gadget Use Among Children

Parents who like to hand electronic gadgets to keep your children occupied, be wary of these ill-effects the habit may cause your young ones.

Shuman
Back in the days, parents used to comfort or "punish" kids by scolding or beating them when they threw temper tantrums in public.

Nowadays, the favourite method to keep children busy, or just occupied is to give them electronic gadgets, be it a smart phone or tablet, so that they will not misbehave or bother their parents when out and about.

The trend has become so prevalent that it is common to see children barely in primary school, wearing spectacles due to vision problems.

Please read this the next time you want to hand in electronic gadgets to your child as the habit carries various ill-effects, as follows:

Research has shown that overexposure to gadgets can slow down cognitive development, and cause attention deficit, as well as impaired hearing. It should you be who's singing him/her lullaby or nursery rhymes at bedtime, or reading stories, instead of some fictitious character on the tablet, or TV.

Have you realized that your toddler/young child gets very agitated when you tell them that screen time is up? That is because technology is addictive, and when you are taking away the 'fix" from them, children can be angry, and frusrated. Keep them occupied with physical games, like Lego, a carrom board, or drawing instead of handing them electronic gadgets.

According to experts, technology does not only hamper cognitive development, but physical one as well. Children, especially toddlers, should be learning about the world around them by touching and feeling them, and not by swiping through imaginary toys on a flat screen!

The lack of physical exercise or activity due to the excessive time spent on the screen also carries the risk of obesity among children. In the US alone, where one-third of children are considered obese, experts estimate that children spend up to a whopping seven hours a day watching TV, browsing the internet, or playing video games. Most children also gorge on snacks and junk food while they are engrossed in technology, thus resulting in obesity. 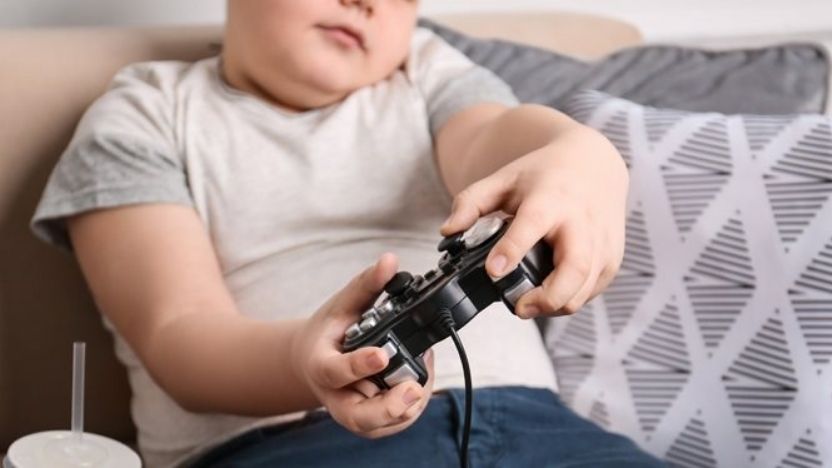 Imagine when a child spends more time with gadgets, rather than their parents or even siblings. If the trend continues, the said child will grow up to be a social outcast who cannot communicate or interact normally with people outside his/her electronic world.

Gadget addiction, like any other obsession, can mess up with a child's education, as the young ones can find it hard to focus on education due to their habit. Overuse of technology also shortens the overall attention span of a child, making it hard for him/her to focus on studies.

One of the worst effects of gadgets as overusing it strains your child's eyes. It causes dry eyes, which in turn opens up the risk for multiple eye infections. The blue light emitted by display screens also prevents the release of sleep hormone melatonoin, causing sleep impairment in the user. In addition, prolonged use also affects vision, which explains why many children barely aged 10 today are donning reading glasses.

8) Causes neck and back pain

Using gadgets for a long period of time render children stationary in one spot, and the posture when they are staring down their screens, causes back and neck pain and other muscle-related issues.

There you go, some ill effects of excessive gadget use. Using gadgets is a necessity in today's fast-moving world, but like everything else in life, it is better limited only when necessary, and regulated closely, especially among younger children.

Let them explore and learn how to live with their hands and feet, and other senses, instead of relying on gadgets do the parenting. Your children will thank you for it one day.