Everything You Need to Know About Lord Subramanyar

Subramanyar is popularly worshipped in Southern India, especially in the Indian State of Tami Nadu. He is often referred to as Tamil Kadavul, which means The Lord of the Tamil people.

Lord Subramanyar, also known as Murugan and Karthikeya, is the son of Lord Shiva and the Goddess Parvathi. His brother is Lord Ganesha. Subramanyar is popularly worshipped in Southern India, especially in the Indian State of Tamil Nadu. He is often referred to as Tamil Kadavul, which means The Lord of the Tamil people. He is the primary deity of the Kaumaram sub-sect of Hinduism.

WHY: Lord Murugan, God of Tamil! 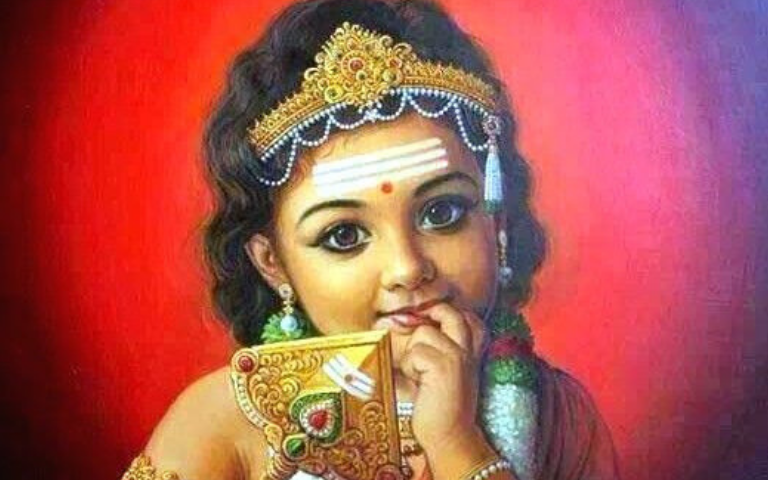 Lord Subramanyar was said to be one of the most beautiful looking and handsome gods. He is often described as exuding boyish charm, and yet, with a serious face. Often depicted as a calm and serene character, He had a face that resembled the radiance of the full moon.

REASON: Why Arumugan is Worshipped Only in South India?

The slayer of demon Tarakasura

A demon named Tarakasura was given a boon by Lord Brahma Himself that He would only be killed by someone who is as strong as Lord Shiva, which would only be his son. It is believed that Subramanyar manifested for the sole purpose of killing Tarakasura. 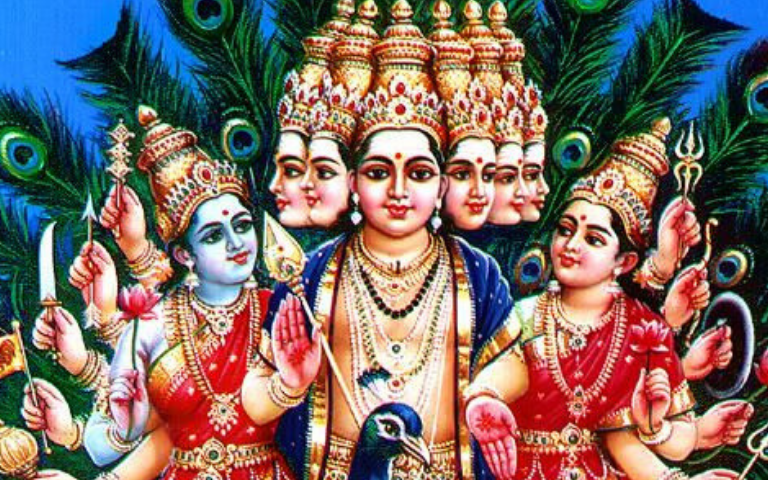 The energy of Shiva which took the form of a baby with six faces and hence the name Shanmugam, Arumugam or Shadanan. Kartikeya was cared for by six women symbolizing Pleiades (Kritika in Sanskrit) and thus, got the name Kartikeya.

The vehicle He rides is a peacock called Paravani. This peacock was originally a demon called Surapadman. Provoking Subramanyar in combat, the demon took the form of a tree. The tree was cut in two by Subramanyar's powerful Vel. One half of the tree became a rooster, which He made His emblem, and from the other half, a peacock emerged, which He made His mount.

The significance of Vel

If you look at the idol of Subramanyar in one hand he carries a Vel (divine spear). It symbolises the Kundalini Shakti. Swaminatha The Guru of Shiva

“But, I can’t tell you like this. You have to give me the place of the Guru. Only if you put me on the pedestal of the Guru can I tell you’, said Kartikeya. 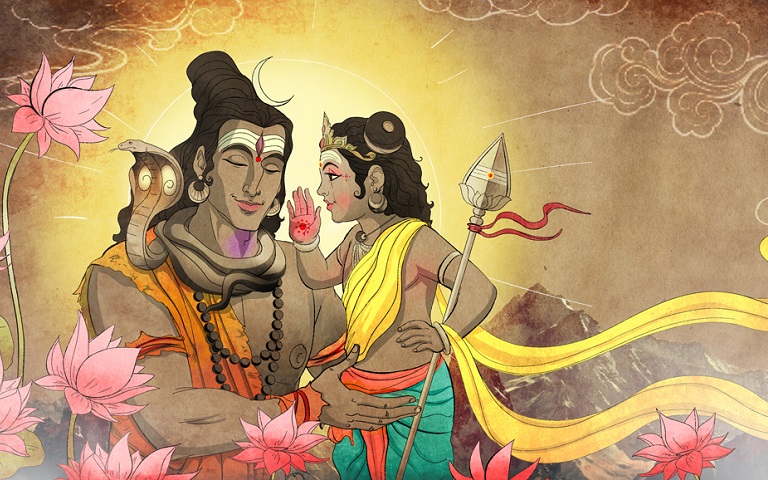 Lord Shiva: (Thinking to himself) ‘Guru means he has to be in a higher position or platform.'

Lord Shiva lifted the young Kartikeya on to His shoulders. And then in the ear of Lord Shiva, Lord Kartikeya explained the meaning of the Pranava Mantra (Aum).

Goddess Parvati was elated and overcame with joy. ‘You have become a Guru (Swami) to my Lord (Natha)! Saying this she addressed her son as Swaminatha.

Amritavalli and Saundaravalli were two daughters of Vishnu, born from his eyes. They developed an undying love for Skanda and performed severe austerities to obtain him as a husband. At Skanda’s instructions, Amritavalli incarnated as Devanai, a young girl under the guardianship of Lord Indra in Swarga (God of Heavens). Saundaravalli took the form of Valli, a lass under the protection of Nambiraja, a hunter near Kanchipuram. 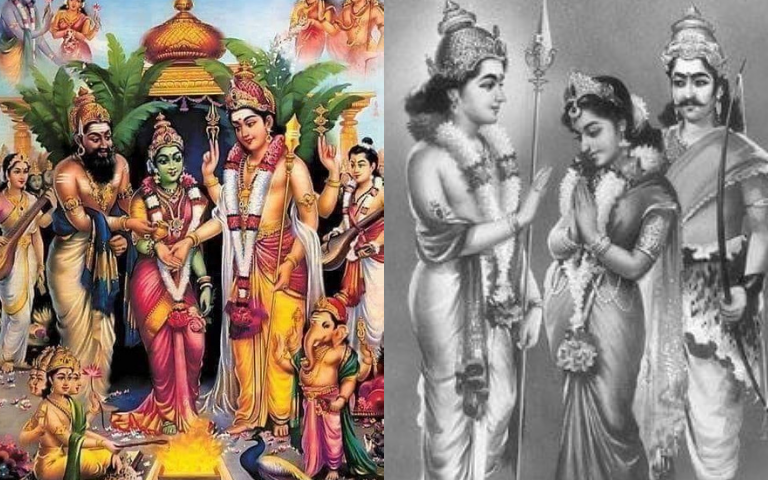 After the war with Surapadman was over, the devas (gods) were overjoyed. Skanda acceded to Indra’s prayer to accept Devanai as his consort. The divine wedding was celebrated with great enthusiasm at Tirupparankundram near Madurai in the presence of Parvathi and Shiva. He then proceeded to Tiruttani near Chennai, where Valli was looking after barley fields. After a series of sportive love-pranks, in which His brother Ganesha also lent a helping hand, He married Valli. 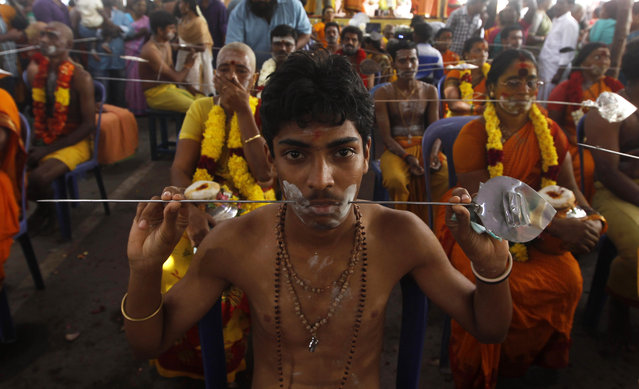 A major holiday dedicated to the worship of Lord Subramanyar is Thaipusam. It is believed that on this day, Goddess Parvathi presented the Vel (divine spear) to Lord Subramanyar to vanquish the demon army of Tarakasura and combat their evil deeds. Therefore, Thaipusam is a celebration of the victory of good over evil.

He is also called ‘Deva Senapati’. Subramanyar, the god of war and general of the army of the gods, is known for his extraordinary strength and skills. It is said that he was perfection personified, extremely brave and intelligent and highly skillful in the art of war. He is considered as the commander in chief of devas as he was mainly created to destroy demons that symbolise negative human tendencies. 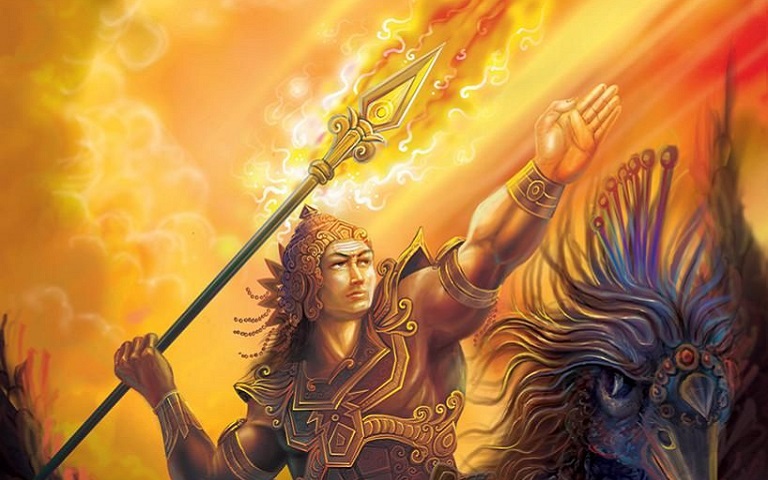 How Can Hindu Youths Celebrate Deepavali?

Deepavali represents the conquest of good over evil. During the festival, lamps are lit in every home and that is why Deepavali is also known as the 'Festival of Lights'.

Elderly Blessings: Reason To Touch Their Feet On Deepavali!

It is a custom or a common practice to touch the feet of an elderly person especially parents and grandparents on Deepavali.

These are seven chai-flavoured desserts you can try to do this Deepavali if you really like tea.

The Death of Naragasuran is Not the Reason Why We Celebrate Deepavali?

What is the actual reason behind celebrating the Festival of Lights? Read on here...