It's Never Too Late to Change! - The Inspiring Story of Arunagirinathar

Arunagirinathar is one of Tiruvannamalai's most famous saints and a renowned Murugan devotee who lived at the foot of Mount Arunachala in the 15th century.

Chelvi Krishnan
Arunagirinathar is one of Tiruvannamalai’s most famous saints and a renowned Murugan devotee who lived at the foot of Mount Arunachala in the 15th century. His parentage is unknown, but it’s believed he is the son of a courtesan (dāsi) named Muttamma. Soon after his birth, the father is said to have passed away and his mother and sister, Adhi, raised him.

They raised him together, teaching him the value of religious and cultural traditions. Arunagiri showed a receptive mind and enjoyed studying the scriptures but as he grew to manhood, his interests gradually turned elsewhere. He cherished the company of courtesans more than the scriptures and was mostly seen in their houses, rather than in temples. 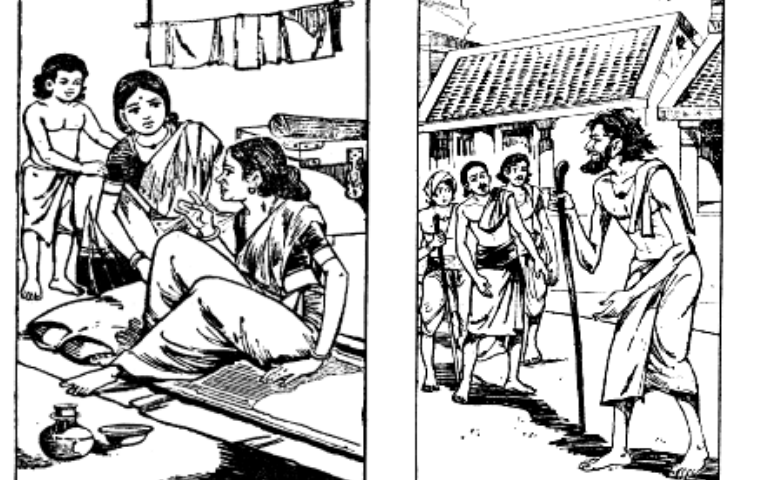 Taking advantage of his sister's affection, he utilised all her jewels and possessions for the devadāsis or prostitutes. Being well versed in Tamil literature, he composed poems for the rich and spent his hard-earned money at the house of the devadāsis. Over the years, his body began to lose its energetic youth rapidly and he contracted numerous diseases.

One day, having no more money, he reached out to his sister and demanded more money.
Sadly, she told him, "Oh brother, I am sorry that I have no money to give you today." This angered Arunagiri and he shouted, insisting he wanted the money immediately to seek the pleasure of the dasis.
His sister replied, "Brother, if you need to have pleasure then please sell me to someone and that money can be then used somehow". Watch the scene here: 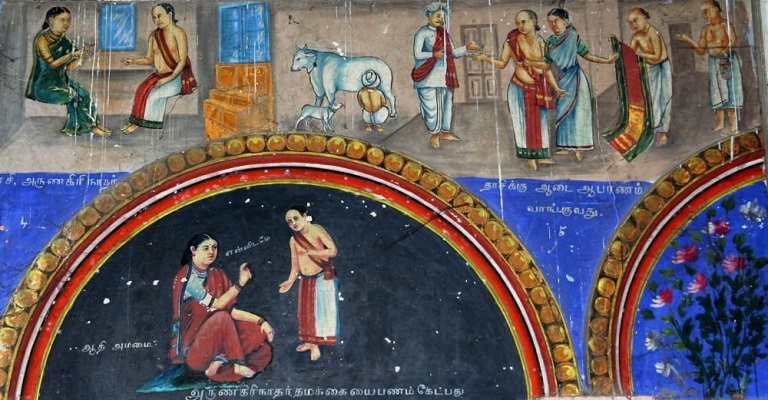 In that thundering moment, Arunagirinathar realised how self-centered and selfish he had become. Realising the ‘crimes' he had committed against the righteous path, he decided to end his life. He ran to the temple and hit his head on all the pillars and steps, begging for forgiveness. He climbed up the Vallala Gopuram of Tiruvannamalai Arunachaleswarar temple, vowing to jump and end his life on the granite stones beneath. Here's the scene: He jumped, but instead of landing on the stones, found himself in the hands of a saviour.

Arunagirinathar, who has been rescued from the darkness of death, now found himself in hands that radiated brilliant rays of brightness and saw, with his own eyes, Lord Muruga.

Lord Muruga then helped Arunagirinathar with the first sentence of his inspired poetry in his praise with the world-famous song "Muthai Tharu Patthittirunagai..."; He showered his grace on Arunagirinathar by directing him to proceed on the divine path and wrote on his tongue, Sadatcharam (Aareluthu) using His Vel, bestowing knowledge and blessings. Find the scene here: Arunagirinathar continued to compose and sing Thiruppugazh, among others, in praise of Lord Muruga. Tiruppugazh is considered one of the central works of medieval Tamil literature, for its poetical and musical qualities as well as for its religious, moral and philosophical content.