Who said national / world records were only for adults? Kids can do almost anything these days, and that includes breaking their very own records.

Meet K. Rashwin who has achieved a new feat by stamping his name once again in the Malaysian Book of Record. Themed, ‘The World Through His Eye: An Immersive Visual Experience’ - his solo exhibition took place at Digital Art Gallery by Filamen, Kedai KL, slated from 7th June till 17th July 2022.

The announcement was made by the parents by taking it to the social media account named, My AutismAmazing SONshine:


The 5-years-old has been entitled as the ‘Youngest Autistic Child to Hold Solo Digital Art Exhibition'; in Malaysia!

What a proud moment for us!

According to Kosmo, the award was handed over to Rashwin by Datuk TPR Sulaiman bin Mohamed (Pengarah Eksekutif Perancangan DBKL), along with Ms.Izlyn Ramli (Director of Yayasan Telekom Malaysia), En. Abdul Shakir (Co-founder of Filamen) and MBR representatives during the launch of ‘Immersio Mengukir’.

Rashwin's artwork was included in the projection mapping which features more than 60 digital new media artists. The child prodigy proves that age is not a limit to individual boundaries of excellence. No matter what it takes, keep your spirit and the force of determination high to make that ambition fly.

This is not his first record as the young lad was previously recognised for having his name sealed in The Malaysia Book of Records for being able to identify 198 national flags within 10 minutes in the year 2021! 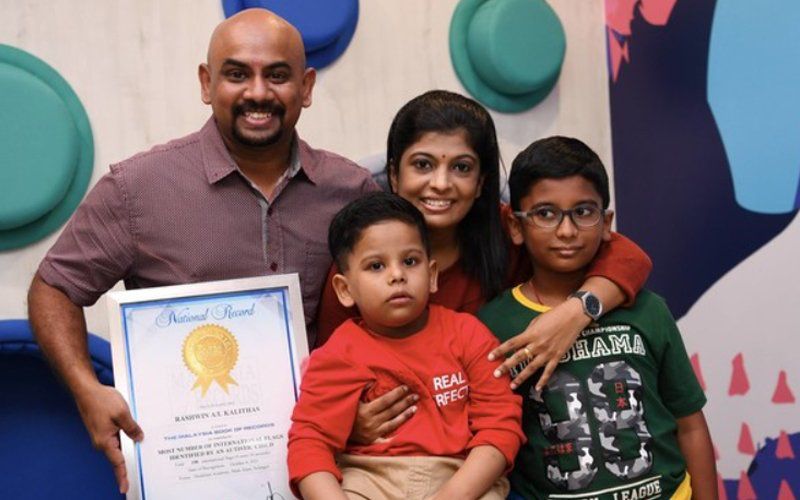 Parents; The main pillar of the Lil one‘s achievement. S. Kalithas (Dad) & Krishnarani Balakrishnan (Mother) are indeed great examples for the parents out there to get their children to gain exposure to different kinds of exhibitions and competitions.

Rashwin is simply born to make history and make his loved ones proud. You're indeed a gem, lil one!

Defying the odds, the two-time world record holder celebrated a historic milestone earlier this month after receiving the prestigious cert on his hands.

Sivanathan Thevar Vikram has made our homeland proud by emerging as the champion of 𝐌𝐫 𝐖𝐨𝐫𝐥𝐝 𝐇𝐞𝐫𝐢𝐭𝐚𝐠𝐞 𝐈𝐧𝐭𝐞𝐫𝐧𝐚𝐭𝐢𝐨𝐧𝐚𝐥 𝟐𝟎𝟐𝟐 during a glittering grand finale held at Mumbai, India.

An amazing accomplishment came after Tanusya Manimuttu chalked yet another plateau by gaining an entry as the 2nd Runner Up at the 6th Canada International Youth Public Speaking and Debate Tournament.