Shuman
Many of us know horseback riding and archery as two different sports, but how many of us are aware that there's one sport that combines these two?

Welcome to the world of horseback archery, and Rubentheran Sivagurunathan, who was recently recognised as the first Indian in the country to be professionally involved in this field.

Speaking to Astro Ulagam, the 29-year-old said that he casually took up horseback riding as a hobby at the Pusat Ekuin Ladam Merah in Melaka, after completing university in 2015. It was when he went for a job interview in Kuala Pilah in Negeri Sembilan a couple of years later did he come across horseback archery.

The director and owner of the Ladang Alam Warisan stable, Muhamad Akmal Mohamad Dahalan, witnessed Rubentheran's horseback riding skills and offered to introduce him to the sport of horseback archery. Muhamad Akmal was already a professional opponent of the sport, who had represented the country in overseas tournaments.

"He (Muhamad Akmal) offered to take me under his wing as no Indian has taken up horseback archery thus far. He offered to teach me for free," Rubentheran recalled.

According to him further, horseback archery is recognised in many countries, including Korea, Finland, Hungary, and Malaysia, where the sport is dominated by the Malays.

Currently, there are about 16 professional horseback archers in Malaysia, including Rubentheran, who is the only Indian.

"The good thing about horseback archery is there is no discrimination between genders. Female opponents can compete against their male counterparts in the same competition," he said. 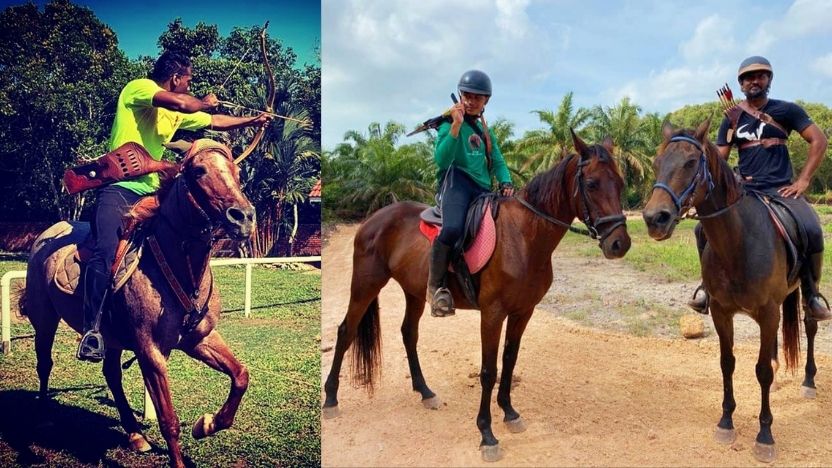 After obtaining his certification as a horseback archer in 2019, Rubentheran currently teaches about six students. He is mainly based in Melaka, but the sport is also taught at several spots in the neighbouring Negeri Sembilan.

Rubentheran has been recognised as the country's first Indian horseback archer by the Malaysia Book of Records, and will be receiving the certificate on Nov 16.

If there is one thing that Rubentheran wants to see, is more Indian involvement in the sport.

"The thing is, horseback and archery has been the backbone of Indian mythology, dating back to the Ramayana and days of our great Kings.

"Unfortunately, not many Indians are interested to take up this sport now. They tend to have the wrong perception that it is an expensive sport, may be because it involves horses, and bows and arrows.

"The fact is, it is not an expensive sport. A full course on horseback riding can cost only a few hundreds, and once one had purchased a bow and arrows and got the grip of it, it is up to one's skills and talents to master the sport," he said.

According to him further, there is no age limit for one to take up the sport.

"I would like to see more Indians take up this interesting sport, and I personally would like to help develop new talents in the field."