A Journey To The Mystic Mountain Kailash

mag
Mount Kailash in Tibet, China is one of the most sacred mounts in the world. Yearly, believers of Hinduism, Buddhism, Jainism and Tibetan Bonpos goes on a 52-kilometre yatra (circuit) around this mountain which elevates 6,638 metre above sea level.

Hindus believe that the sacred mount is the home of Lord Shiva, meanwhile Tibetan Buddhists believe that it is resided by Buddha Demchok. Mount Everest which elevates 8,848-metre above sea level was easily conquered by men. But to-date, no man has ever climbed Mount Kailash and it is said that many have died trying. Knowing it's significance to many religions, China has imposed a ban on climbing the summit.

If you want to go on one of the best pilgrimage of your life, then here's how you can get to this sacred mountain. It is a must for foreign travelers to arrange an organized tour when visiting Tibet. This includes travel permit, private vehicle and a tour guide. Since Tibet is a remote and an isolated place, the trip will never be an easy one.

The process of getting a travel permit to Mount Kailash can take up to 4 weeks, so it's important to plan the trip ahead before arriving at the Tibetan capital city Lhasa.

If you're traveling from Malaysia, there are no direct flight to Tibet. You can either fly to Bijing, China or Kathmandu, Nepal and catch another flight to Lhasa Gonggar Airport, the only international airport in Tibet. If you want to travel from India, you still need to fly to Nepal first, before heading to Lhasa.

It is possible to take an overland trip to Mount Kailash from Kathmandu, Nepal via the border crossing at Kyirong. It will take over 20 days in total to reach the starting point.

Lahsa is located approximately 1,200-kilometre away from Mount Kailash. It is advisable to take your sweet time and acclimatize when traveling to the mount, as the high altitude can cause serious complications. The 52-kilometre journey circuiting Mount Kailash begins in the village of Darchen (4680 metres above sea level). Here you can buy necessary supplies and snacks which are needed for the trek, but it is advisable to arrange it in advance.

Most Tibetans can complete the 52-kilometre trek in just 14 to 16 hours. But a foreigner should take about 3 days, as we are not accustomed to the high altitude.

You need to be in your best physical condition, and previous trekking experience is necessary to conquer this trek. The ticket to Kailash cost about RM92. 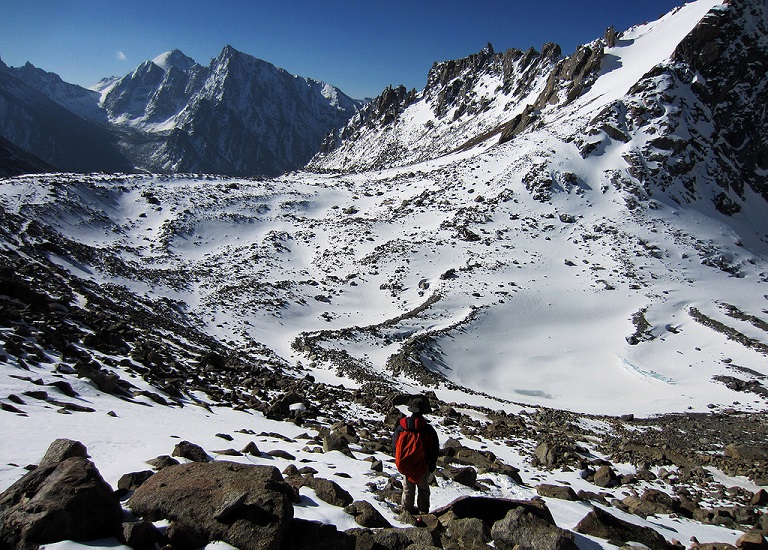 During the trekking, you can see Tibetan prayer flags along the Prostration Points.

On the first day of the trekking, put up in Dira Puk (5,080 metres above sea level) which is about 20-kilometre away from Darchen. It is considered an easy trekking to this point which takes about 6 hours or so and the accommodation here is quite basic.

The third day has the easiest trekking which takes about 4 hours to complete. It's a 12-kilometre trekking, back to the starting point. You can only visit Mount Kailash between the month of May and October, as there will be heavy snows and high temperature during the other months.

Every year, thousands of devotees go on this extremely difficult pilgrimage with the belief that they can cleanse out their sins and get the Lord's blessings.

KL To Paris Via Land: The Journey Of A Lifetime​