Mumtaz vs. Nithya! Who wins in the Battle?

As we all know, Bhalajie and Nithya are a married couple who now have separated due to a highly-publicised issue. An onion battle ensued between Nithya and some of the contestants when Bhalajie suggested that she should add onions in her dish. Find out more!

As we all know, Bhalajie and Nithya are a married couple who now have separated due to a highly-publicised issue. An onion battle ensued between Nithya and some of the contestants when Bhalajie suggested that she should add onions in her dish.

Nithya was adamant in not using the onions and eventually wasted it. Despite the house captain Janani trying to calm things down, Nithya still insisted on not using any onions.

Deeply disturbed Bhalajie was consoled by Anand, Mumtaz and others in the house. Mumtaz turned into a temporary marriage counselor for Bhalaji and even suggested ‘reverse psychology’ in order to make things work in their marriage. 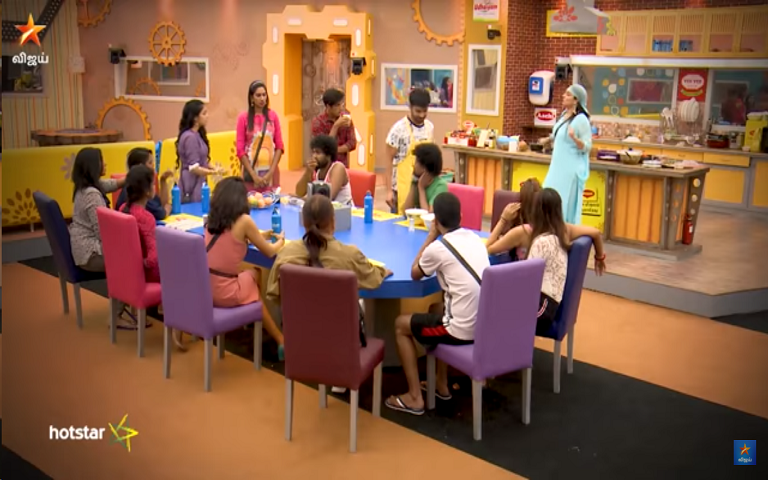 The issue further spiraled into a big argument. No one was ready to listen but everyone was interfering with each other. Even Captain Janani was interfered by Mumtaz. Finally, Anand made everyone shut and stated out his points and what everyone has been feeling about this ‘onion’ issue clearly.

But that didn’t stop Nithya and Mumtaz from restarting their argument yet again. Words like ‘lack of communication’, ‘taking orders’, ‘no discussion’, ‘you are blaming me’ and ‘nobody is a maid’ started flying. Although on the surface it seemed like ‘food fight’, the real reason behind Nithya’s complaints originated from Nithya’s stubbornness and inability to take orders or handle authority over her, especially from her husband Bhalajie.

Senrayan and Vaishnavi stay by Bhalajie individually to calm him down after the incident. Mumtaz finally burst out and said, “I’m done”. Team Vaishnavi-Anand-Mamati managed to change her mind and no one had to go hungry for dinner.

Eventually, Nithya and Mumtaz sort out their differences and apologise to each other. The entire episode was focused on this conflict. Many contestants including Ponnambalam, Riythvika, Aiswarya, and Yashika didn't voice out their thoughts during the verbal battle. We feel the fragments of the arguments will continue to loom over the villa in coming days. Let’s see how long the peace will last this time?
#Bigg Boss