The Significance Of Tying 3 Knots In A Hindu Marriage

Among the many rituals of a Hindu marriage, tying Thaali (a sacred thread), also known as Mangalyam, serves as the most important and essential ritual of all.

Among the many rituals of a Hindu marriage, tying Thaali (a sacred thread), also known as Mangalyam, serves as the most important and essential ritual of all.

During the wedding, the groom ties the thaali amidst the melam thaalam, while the attendees bless the couple by showering them with rice and flowers.

The couple will only be regarded as husband and wife once the groom ties the sacred thread around the bride's neck, with exactly three knots. Tying the thaali is known as 'mangalya dhaaram' and the three knots are known as 'moondru mudichi'.

But why three knots and what are the significance of these knots? 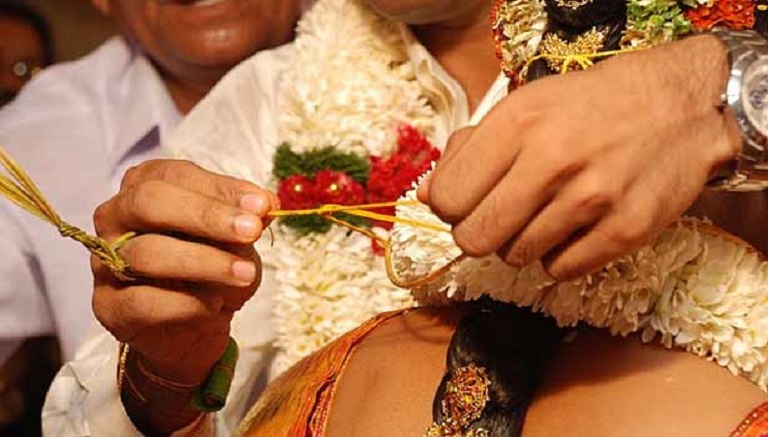 The groom only ties the first two knots, while his sister or anyone in similar relation ties the remaining one knot. However, in some instances, the groom ties all the three knots.


During mangalya dhaaram, the priest will recite Vedic chants:

Which bring the meaning of:

I am trying this sacred thread around your neck, which is essential for my long life. May we have many auspicious attributes for a long and happy life for a hundred years.

The three knots can also signify three promises by the husband to his beloved wife, which are known as manasa, vaacha and karmena. Which means, believing it, saying it and executing it. But these are not the only significances, as there are many reasons behind the three knots:

Celebrity couple Vignesh Shivan and Nayanthara's first official wedding photo is out! Congratulations to the newlyweds...

The second season of Rap Porkalam has now become the standard for Tamil rap competitions worldwide, says local rap legend Yogi B. Here's a chat with him, his fellow judge Navin Navigator, and the mentor, Saint TFC, about their experience being on the show...

Five Kollywood Actresses Who Have The Biggest Instagram Fan Base!

These are some of the Kollywood actresses who have the most number of Instagram followers in recent times...