Surya Namaskar, or Sun Salutation is not just a sequence of poses that is done to create body heat. The practice, known as 'King of Yoga', is a systematic method that revitalizes every aspect of your being, from physical to the spiritual.

On a spiritual note, Surya Namaskar should be practiced by chanting mantras which are believed to represent the 12 zodiac signs and supply energy to the body, mind and soul.

Below are the mantras for each asana (poses) in Surya Namaskar, and their significance, as stated by the Ministry of Ayurveda, Yoga & Naturopathy, Unani, Siddha, Sowa Rigpa and Homoeopathy (AYUSH), which was established in 2014 to ensure the development and propagation of traditional systems of medicine and health care.

Assume the namaskar position, with both palms joined together at your chest.

Meaning: One who is affectionate to all.

Raise up both palms and bend backwards

Meaning: One who shines

Now, bend down with both hands reaching the toes.
Mantra: Om Suryaya Namaha

Meaning: The one who dispel darkness and generates activity.

Now go down with the right/left leg to the front, at a 90-degree angle between the thigh and calf. Keep the arm by the side of the leg, and touch the ground to support the body, and maintain balance. Rest the right/left knee on the floor and look upwards.

Meaning: One who illuminates or the bright one.

Next, get into a sitting position, with your back straight and legs stretched outwards. Press your buttocks on the floor while placing your palms next to your hips, on the floor.

Meaning: One who moves through the sky. 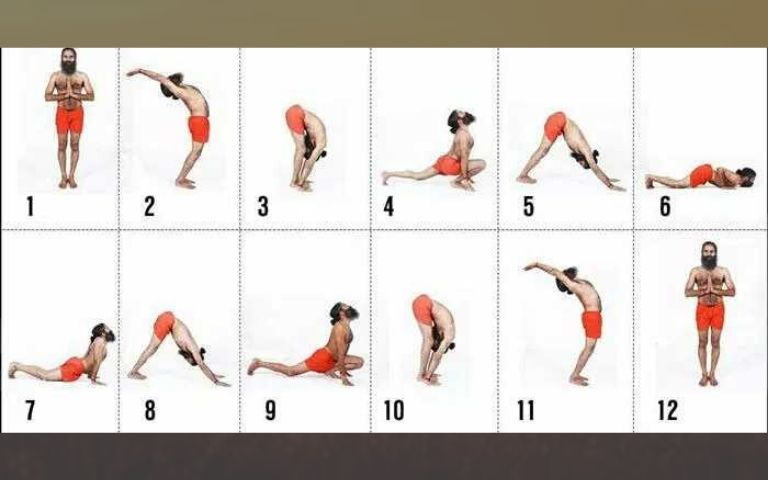 Now, assume plank position and drop your knees to the floor. Lower your chest and chin down the floor, while keeping the elbows close to your side. Bring your buttocks up and the toes should be tucked under

Meaning: One who provide nourishment and fulfillment.

While lying on the floor on your belly, lift up your upper body with the palms firmly on the ground, and elbows straight. Your feet should be pressed on the floor behind you.

Meaning: One who has wisdom.

Next, lift up your hip with both palms pressed firmly on the mat, and arms close to the ears

Meaning: The one who give light with infinite rays.

Now go down with the right/left leg to the front, at a 90-degree angle between the thigh and calf. Keep the arm by the side of the leg, and touch the ground to support the body, and maintain balance. Rest the right/left knee on the floor and look upwards.

Reassume standing position, then bend down with both hands reaching the toes.

Meaning: One who is responsible for everything.

Put both palms together, raise them up and bend backwards.

Meaning: One who fit to be praised and glorified

Stand still, with both palms stretched out by the side of the thighs

Meaning: The one whi give wisdom and cosmic illumination.

Bhangra To A Better Body!

Bhangra is one of the best folk dances to get in shape while listening to your favourite Bollywood tunes. Here's why and how!

Put your willpower to the test with these four basic habits for a healthy lifestyles that everyone should diligently practice...