Chelvi Krishnan
Millions of children around the world go to bed on Christmas eve believing that a 'white-bearded fat man in a red robe' will leave them Christmas presents if they behaved well for the entire year! 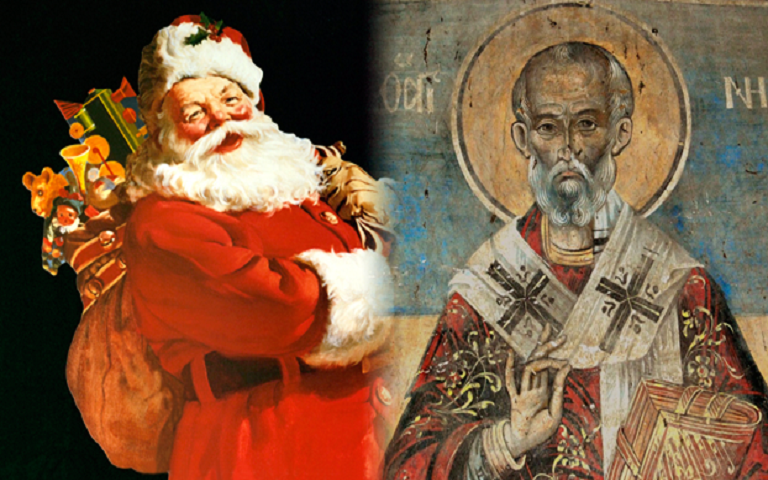 The story of 'Saint Nicholas'

In the fourth century, lived a Bishop named St. Nicholas in Myra, now known as Turkey. He was very rich as his parents died at a young age, leaving abundant of wealth behind. St. Nicholas was a generous man who is well-known for helping the poor as well as giving others secret gifts.

As the legend goes, he once helped a poor man who didn't have enough money to pay for his daughter's wedding. St. Nicholas dropped a bag of gold through the chimney, which fell into a stocking that was hung by the fire to dry. And that's how the custom of hanging stockings to put presents first started.

The old man later discovered it was St. Nicholas, who helped him and the news soon spread out. Since then, whenever someone receives secret gifts, it was thought that it might be from St. Nicholas himself.
During his time, St. Nicholas was seen wearing robes with a wide range of colours. But, red was his favourite! St. Nicholas was exiled and prisoned later and his remains now rest in Italy. The story of St. Nicholas became unpopular after some time, but became popular again after a poet wrote the poem 'A Visit from St. Nicholas' in the year 1823.

One of the early illustrations of St. Nicholas was drawn by Thomas Nast and in 1881, Harper's Weekly published his famous image of Santa with a big red belly, an arm full of toys and smoking a pipe!

St. Nicholas Day is celebrated on 6th December, yet he is also seen as Santa Claus who delivers gifts to children on Christmas eve. But the story of Saint Nicholas is not the only one around! There are also a few other versions of Santa Claus, such as UK's Father Christmas, Dutch's Sinterklaas, Finland Joulupukki and German's God Wodan. But in the modern days, these characters were somehow merged together and became Santa Claus, the gift-giver!