Must Visit Murugan Temples Around the World

Let's take a trip around the world with Lord Murugan, and discover some of these temples!

The Tamils have always been regarded as great temple builders. Their rulers, the Pallavas, Cholas, and the Pandyas were ardent patrons of art and architecture. The Tamil diaspora, scattered around the world have taken their love for temples, and their beloved deity Lord Murugan, wherever they have settled.

Let’s take a trip around the world with Lord Murugan, and discover some of these temples, starting with the Aaru Padai Veedu Temples (six divine abodes), which are the most significant shrines to Lord Murugan in Tamil Nadu.

Located on the outskirts of Madurai on a hillock, this is said to be the place where Lord Murugan married the daughter of Indra, Deivayanai. Indra, the king of heavens, gave the hand of Deivayanai in gratitude to Murugan on his victory in battle over the demon King Surapadman.

The first of the six Padai Veedu Temples, this is the only temple where abishekam (the sacred bath) is performed to the Vel (sacred weapon) instead of the deity of Lord Muruga. The shrine at Thiruchendur was built to mark the victory of Murugan over the demon king Surapadman. It is the only temple out of the six Padai Veedu located near a seashore; the others are on hills. According to legends, after the killing of Surapadman, Lord Murugan wanted to thank his father Lord Shiva, and a shrine was constructed. Even now one can see the statue of Murugan in the posture of prayer to his father.

READ: What Happened When the Dutch Tried to Steal Thiruchendur Murugan Idol?

This hilltop temple has 690 steps and Lord Murugan is worshipped here as Dhandayuthapani, the one holding a staff in his hand. The idol of Murugan here is made of a mixture of nine poisonous substances by Saint Bogar, which has medicinal value when mixed at a certain ratio.

According to legends, Sage Narada visited Lord Shiva in his abode and presented him a fruit which was considered the fruit of knowledge. Shiva decided to hold a competition amongst his two sons, Ganesha and Murugan, and the fruit would be given to the first one to successfully circle the world. Murugan accepted the challenge and quickly mounted his vehicle, the peacock, to begin his journey. Ganesha, in turn, said to Shiva that for him the entire world is his parents and he would circumambulate them.

This clearly made him the winner and Shiva awarded the fruit to him. When Murugan returned and he found that his elder brother had already won the fruit, he became disappointed and so he left Kailash and stood atop the Palani Hills. Believed to be built by the King Parantaka Chola I in the 2nd century BC, it is located atop a hillock. One has to climb 60 steps, named after 60 Tamil years, to reach the temple. Murugan here is known as Balamurugan and as Swaminatha Swami. The temple is considered as the place where Murugan preached the meaning of the Pranava Mantra 'AUM' to his father Shiva. This is the place where the son is depicted as the teacher and the father as his student.

READ: Swamimalai: Your Guide to Understanding the Temple The temple is located about 700 ft above sea level and devotees climb 365 steps, representing 365 days of the year, to reach the shrine. The temple has a quite a number of legends, one amongst them being that Murugan is believed to have rested atop the hill in order to calm himself after killing the demon king Surapadman at Thiruchendur. It is also said the wedding of Murugan and Valli took place here.

FIND: Reasons Why You Must Visit Thiruthani Murugan Temple Located in Solaimalai hill, within the vicinity of a holy stream nearby called "Nupura Gangai", this is the only one of the six Padai Veedu Temples where Lord Murugan graces devotees with his consorts Valli and Deivayanai.

This is also the site where Lord Murugan played with the great Tamil poet Avvaiyar, asking her what fruit she wished, hot or cold – Sutta Pazham or Sudadha Pazham.

Kataragamam Temple in Sri Lanka is a temple complex dedicated to Buddhist guardian deity Kataragama Deviyo and the Hindu God Murugan. It is one of the few religious sites in Sri Lanka that is venerated by the Buddhists, Hindus and others alike. According to S. Pathmanathan (a Sri Lankan Tamil historian, academic, author and current chancellor of the University of Jaffna), the original Kataragama shrine was established as an adjunct guardian deity shrine to Skanda-Kumara within a Buddhist temple complex. This particular shrine then became idealised as the very spot where Valli met Murugan. Over the years Kataragama Deviyo subsumed the identity of Skanda-Kumara and became a deity on his own right with rituals and pilgrimage. In the 15th century CE, the poet Arunagirinathar identified the very location as a sacred spot.

Click Here To Read: Evidence - Murugan Has Been Worshipped in Sri Lanka for Centuries

For the Tamils in Mauritius, Palani is the most important place of worship. Almost everybody dreams to have a pilgrimage to Palani which they consider to be the Mecca for the Tamils. In Mauritius, the Sri Siva Subramanya Thirukovil of Corps de Garde Mountain is a Padai Veedu.

'Oh Lord, I have not seen Tanikai Hill
Neither have I seen Palani Hill
My sadness knows no bound, so for me
Quatre Bornes Malai is your Padai Veedu'

Such is the heart-melting words of the hymn "The Mauritius Murukan Pāmālai", composed by P. Tiroumale Chetty. The Batu Caves Temple in Malaysia stands out as a monumental focal point of the significant contribution made by Indians in Malaysia. In 1891, K. Thambusamy Pillai, an influential descendent of Indian immigrants from Tamilnadu, India, installed the deity of Murugan in the temple. He was inspired by the vel-shaped entrance of the main cave and was inspired to dedicate a temple to Lord Murugan within the caves.

Since 1892, the Thaipusam Festival has been a grandiose affair. Toda, the temple attracts more than a million devotees during this celebration. Some of the distinguishing characteristics of the temple are the steep flight of 272 steps, that devotees need to climb to reach the main temple, and the striking 42.7-meter-high statue of Lord Murugan. This gold-coloured statue was unveiled in January 2006 and is the highest statue of Lord Murugan the world. 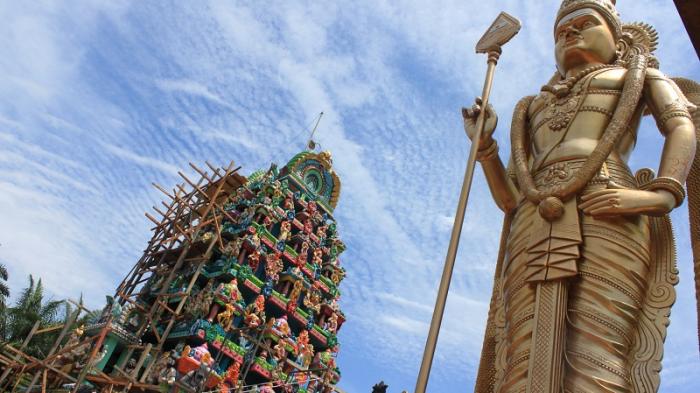 Of the major festival in this temple is Thaipusam, which, like elsewhere, is celebrated with a procession, Kavadis, and devotees carrying milk offerings “Paal Kudam” dedicated to Lord Murugan. The original, Kandaswamy Temple was founded in 948 A.D by Buwanika Bahu, a minister to the King of Kotte. Nallur served as the capital of the Jaffna kings, with the royal palace situated very close to the temple. However, the present-day rebuilt temple does not match its original locations which instead are occupied by churches erected by the Portuguese.

The fourth and present temple was constructed in 1734 A.D, during the Dutch colonial era by 'Don Juan' Ragunatha Maapaana Mudaliyar, who served as a Shroff in the Dutch Katchery, in a place identified then as the 'Kurukkal Valavu'. Krishnaiyar a Brahmin, served as the first priest of the temple.

FIND OUT: How Did Murugan And Valli First Meet?

Today, the temple hosts various festivals, including the popular Ther Thiruvila (chariot festival), during which glamorously dressed statues of Lord Murugan and his consorts are carried out on a procession. The chariot, pulled by a rope of thousands of devotees, both rich and poor, old and young, stand shoulder-to-shoulder to show their devotion.

The Gubera Raja Gopuram was unveiled in 2015. To date, this tower is recorded as the biggest Gopuram on the Island. 'Guberan' is the deity of wealth and the local people believe that this Gopuram will attract more wealth to the people of Jaffna.

All You Need to Know About Thirumurugatruppadai

Thirumurugatruppadai is a classical Tamil poem written by Nakkeerar. Here's all you need to know about it.