The Unsolved Mystery of 400-Year-Old Shivan Temple in Bangalore

The Unsolved Mystery of 400-Year-Old Shivan Temple in Bangalore

India is a treasure trove of ancient Hindu temples and the divine mysteries surrounding them. To date, many historians marvel at the complex structure and unique architecture of Hindu abodes across the nation.

In the heart of Bangalore's Malleswaram, stands a small temple named 'Sri Dakshinamukha Nandi Teertha Kalyani Kshetra', or more famously known as Nandi Teertha. Frequented by locals and foreigners, the temple holds a mystery since its rediscovery in 1997. But first, let's dive into how the temple was found.

Back in the late 1990s, a lot of empty land opposite the Kadu Malleswara temple was being cleared for commercial use. The laborers encountered a statue of Nandi and soon the project was given to the Archaeological Survey of India. As the team excavated the area, they unearthed a complex with a 'Shiva Lingam' below the Nandi statue and a pond often referred to as 'Kalyani'. The pond is surrounded by 'granite steps and pillared mandapas' perfectly intact even after being buried for many years.

The structure is also considered as part of the bigger Kadu Malleswara temple complex as it fulfills the criteria of stepped bathing wells or 'Kalyani', commonly built near Hindu temples.

When the archeological team cleaned Nandi, a stream of water started flowing from its mouth, falling onto the Lingam and pooling into Kalyani. Nobody could figure out where the water was coming from. 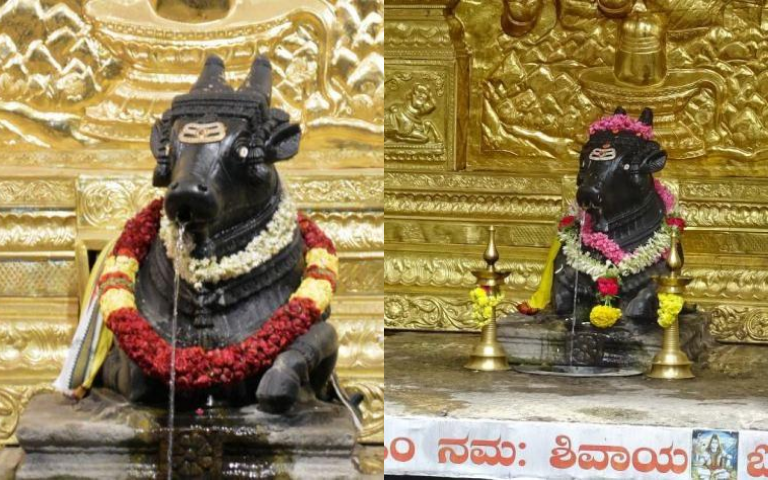 Some believe that the water originates from an underground fresh spring system, while others think that it could have come from the nearby Sankey tank. However, the Sankey tank was established in 1882, much later than Nandi Teertha. Even today, the Shiva Lingam situated below the Nandi statue is continuously bathed by the 'holy water' or 'Teertha' from the statue's mouth, and flows into Kalyani. The source of the water is still unknown.