It was supposed to be a quiet day at home for Suresh. In a surprising twist of events, he somehow ended up in the kitchen with Yasmin and a potato! What happened in between? And why did they keep saying that they aren’t guilty?

It began with a text message
While he was chilling out on the living room sofa, Suresh received a text from a bored Yasmin, who wanted to come over and watch a movie together. Soon after her arrival and while watching TV… The stillness of the room was suddenly broken by the sound of Yasmin’s growling stomach. Hungry, she asked Suresh if there was anything to eat.
Despite teasing Yasmin about troubling him all the time, Suresh offered to fry her some Potato Cheese Balls.

Seeing all that oil, Yasmin got a little worried 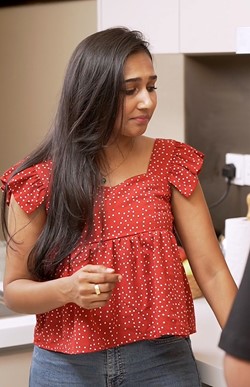 Here’s what Yasmin didn’t know though. Suresh uses NeuVida cooking oil, a healthier choice so they can enjoy the fried food without guilt!

Still hungry, Yasmin wanted more food, but Suresh wasn’t going to give in so easy this time. He put her cooking skill to the test instead! 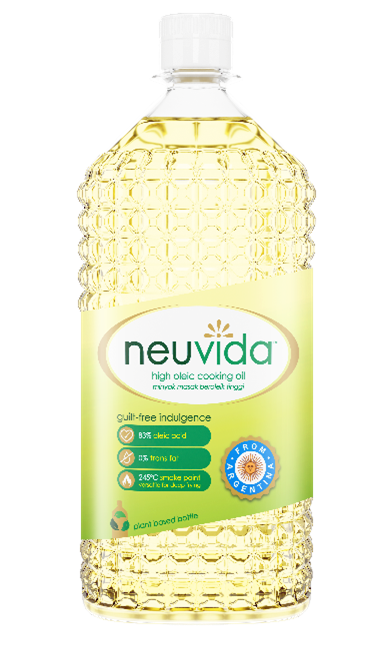 83% High Oleic Acid
It’s the only high oleic acid sunflower seed oil in Malaysia—even higher than the percentage of oleic acid you get from olive oil! Oleic acid is a type of healthier fat, making it better for you than regular oils. This was why Suresh and Yasmin kept saying they didn’t feel guilty eating the fried food!

Besides cooking, NeuVida oil works as a great base for your salad dressings too!

Packed in bio-PET bottle
The bottle is made of eco-friendly packaging—30% renewable plant materials. Plus, it’s 100% recyclable!

If you’re looking to make healthier choices, switching to NeuVida is definitely a good choice!