Who Is Lord Ayyappan?

Lord Aiyyappan, also known as Hariharan Puthiran is the son of Lord Shiva and Mohini...

Sabarimala is a famous pilgrimage destination in Kerala, India for devotees who take immense delight in having a small glimpse of Lord Ayyappan's statue. A huge crowd from all over the world visits this temple yearly to show their devotion to their beloved god.

The Legend Of Lord Ayyappan

Lord Aiyyappan, also known as Hariharan Puthiran is the son of Lord Shiva and Mohini, the avatar of Lord Vishnu. He, who inherited both Shiva and Vishu's superpower was incarnated with the sole purpose of slaying Mahishi, the sister of Demon Mahishasuran.

Mahishi who was determined to avenge the death of her brother secured a boon from Lord Brahma that only the offspring of Vishnu (Hari) & Shiva (Haran) could slay her. She then began terrorizing the Devas.

Lord Ayyappan was left by both Lord Shiva and Vishnu, to be adopted by childless King Rajashekhara of Pandalam. He was named Manikandan.

The Queen gave birth to a male child later on. The King, who realizes that the miracle is linked to Manikandan's divinity and decided to make him the heir to the throne.

However, the Queen who wanted her own son to be the heir to the throne plotted an evil plan and convinced everyone that she's ill and can only be cured with the application of tigress' milk. Bound by his duty as a son to his mother, Manikandan entered a dense forest in the search of tigress milk and slew Mahishi. He realized that he has served his life purpose and proceed to the palace by riding on a tigress.

Realizing the Queen's malicious plan, the King begged the 12-year old Manikandan for forgiveness, who in return reminded the King that he had accomplished his task and would return to Devaloka.

Before departing, he offered to grant a wish to the King and the King conveyed his wish to build a temple for him. Manikandan aimed an arrow which fell at Sabari. He then asked the King to construct a temple there before disappearing.

The King completed the construction of the shrine and the sacred eighteen stairs leading to the temple. The statue of Lord Ayyappa was carved and installed on the day of Makarasankranthi, a day which marks the first day of the sun's transit into Makaram. 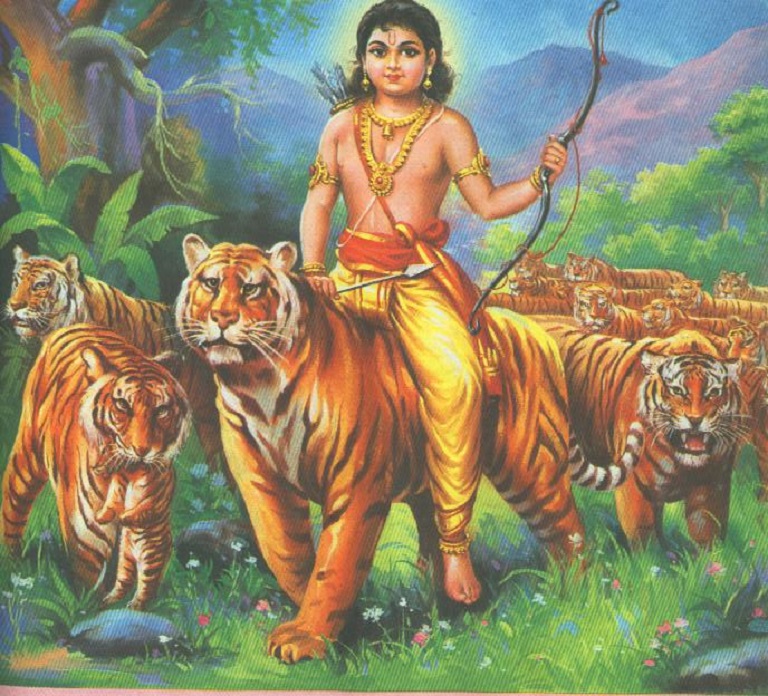