This Woman Spent 9 Years Fighting for a 'No Caste, No Religion' Certificate... and Won!

Born and bred in a family that never believed in caste or religion, Snegha sees herself as an 'Indian' before anything.

A. Sneha Parthibaraja is a 35-year-old lawyer from the Tamil Nadu city of Vellore, who might be the first Indian woman to obtain a 'No Caste, No Religion' certificate.

It took her nine years, but Sneha's struggle finally bore fruit when she was granted the certificate she wanted on Feb 5th, 2019.

The caste system is deeply rooted in India's social structure. Initially, based on an individual's work or profession, it later evolved into a hereditary social ranking system that affected most aspects of an individual's life -- like marriage, religious worship, and social status. There are over 3000 castes and 25,000 sub-castes in India, branching out from the main castes: Brahmins (priests), Kshatriyas (warriors), Vaishyas (working class), and the Shudras (commoners). Though the caste system was legally abolished in 1950, many forms and documents still have columns for 'caste' and 'religion'.

Born and bred in a family that never believed in caste or religion, Sneha sees herself as an 'Indian' before anything. The caste and religion boxes have been deliberately left blank in all her official documents, including her birth certificate.

"Despite several court directives and government orders clarifying that no one could be compelled to mention caste name in certificates, schools made students mention their caste and community names in their certificates," she said to TOI. 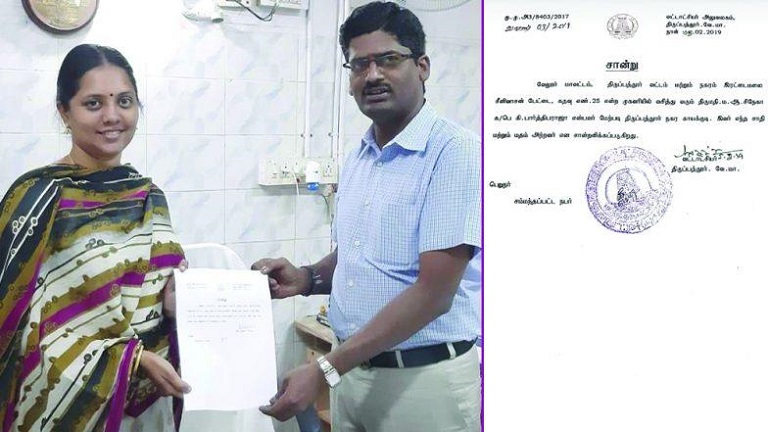 She fought a legal battle for 9 long years, initially writing letters to the officials and when they barely took a look at her requests for a no-community certificate, she 'applied by employing a procedure they use for a community certificate in 2017'.

"They initially said there was no precedent for it, besides raising points like, ‘what is the use of this certificate’ and ‘we cannot agree to give you one without any particular reason’,” Sneha explained.

However, after Sneha's relentless efforts and reasons, they gave up. Asked for comment, Sub-Collector B. Priyanka Pankajam, who granted Sneha the certificate, explained her decision by saying, “Though we found no precedent, we decided to go ahead and certify her as it will not affect anybody or take away another person’s opportunity.”

According to the Times of India (TOI), Sneha claims to be the first woman in the India to get such an official certificate.

You have actuated a long dormant desire among Indians. Let’s discard what never belonged to us. Let’s caste away Caste. From this point, a better tomorrow will be more accessible. Bravo daughter. Lead India forward. https://t.co/tdjngFiHWl

Lawyer Sneha encourages more Indians to come forward and acquire the certificate in order to strip caste and religion from their identity.

“Irrespective of what caste or religion they were born into, people with means should apply for the ‘no-caste-no-religion’ status, so that economically weaker sections and individuals fighting for their basic rights would get their due without hassle,” she explained.

What are your thoughts on this? Let us know!

Embrace Entrepreneurship with the Disruptive Womanization Program this Weekend!

The Disruptive Womanization 2022 initiative organized by non-profit organisation Sampurna Malaysia is back to help women unleash their entrepreneurial qualities to succeed in business, and in turn, enjoy a better socio-economic future.

This Woman Used To Sell Lemonades. Now She's a Cop In the Same Area

Anie Siva was left by her husband, with her six-month-old baby in tow, when she was very young. She did not give up trying, and today, she's a sub-inspector at the same area she used to sell lemonade and ice cream from.

Vizhuthugal Moderators Talk About Claiming Their Rights and Rising Above Men

Here's an interview with Vizhuthugal: Samugathin Kural moderators Selvamalar Selvaraju and Yiswaree Palansamy on how women can rise above their male peers, as long as one puts the effort into it.