Breaking Racial Barriers, One Lion Dance At a Time

One cannot be faulted for visualizing a predominantly Chinese male-crew at the mention of a lion dance troupe.

One cannot be faulted for visualizing a predominantly Chinese male-crew at the mention of a lion dance troupe.

A tudung-clad Indian Muslim girl is the last person one would imagine to be making waves in the Chinese traditional dance, but that's exactly what Mariam Abdul Nazar is doing.

Astro Ulagam recently spoke to the 24-year-old about what got her started in the art, and what made her stay for 10 long years with the Khuan Loke Dragon and Lion Dance Association, based in Sungai Way, Selangor.

"My brother used to join the troupe, and my siblings and I used to tag along to see him practice near our home in Sungai Way, when I was a teenager.

"Watching him perform piqued my interest, and seeing how I was hooked to following his practice session, he asked me to join the troupe as well," she said, adding that the decision was not hard, given there were other female members in the troupe.

Mariam joined Khuan Loke when she was just 14, and has participated, and won various competitions with them, in the last 10 years, both locally and abroad.

She plays various music instruments, including the drum, cymbal, and gong, during the group's performances, but had also performed lion dances in her earlier days.

As for how the acceptance has been to her involvement in lion dance performances, Mariam said that she is fortunate that her family has been very supportive.

"My father is fine with me participating in lion dance performances, as long as I divide time between this and my studies," said the lass, who is studying Degree in Business Management at the Wawasan Open University.

There are, however, who have tried to discourage her participation, and failed.

"There have been friends and relatives who asked me to stop joining, as it was 'against the religion', but I choose to ignore them.

"As far as I'm concerned, I see this as a sport. And better still, I get paid to do it," she quipped. 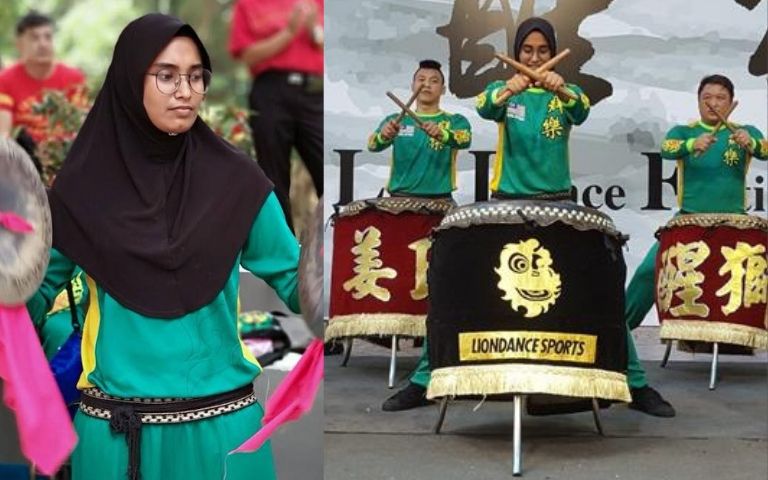 As for the challenges faced, Mariam said it was adapting into the surrounding when she first joined the group.

"The fact that I can speak Chinese helped me blend in well, and there are also other Malays in the group," said Mariam, who also speaks fluent Tamil.

Mariam's message for the non-Chinese who may be interested to join a lion dance troupe, but are plagued by doubts: "This (lion dance) has nothing with religion. Do join, you will have fun," she laughed.

Another non-Chinese performing with Khuan Loke is 17-year-old B Rishivigknesh.

He joined the group over 4 years ago, and like Mariam, he also plays the instruments and dances in the lion costume.

According to Rishivigknesh, he has been learning Chinese since kindergarten, and he developed interest in Chinese culture over the years.

He told his mother about this, and together, the duo embarked on a mission to search for an activity which can help him achieve his passion, and found Khuan Loke. 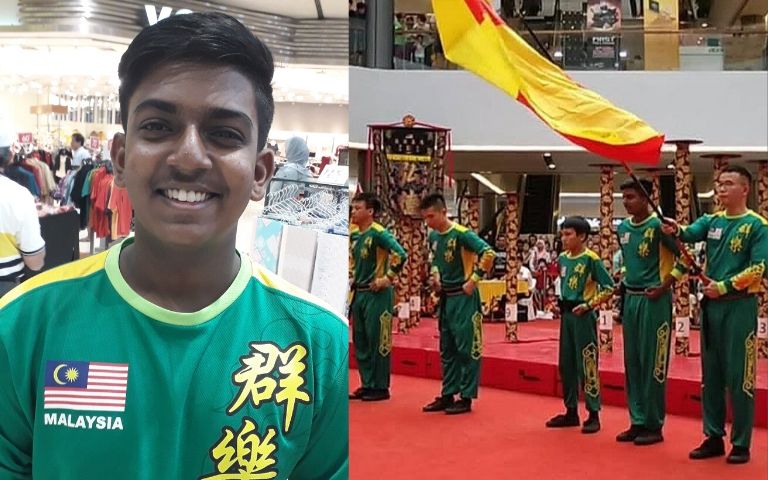 "I joined the troupe after my UPSR. It was tough sometimes, especially during my Pentaksiran Tingkatan Tiga (PT3), where I had to put my participation on hold until the exam concluded," he told Astro Ulagam.

He plans to do the same this year, when he sits for his Sijil Pelajaran Malaysia (SPM) exam.

"Then I plan to rejoin the group full time, while I wait for my SPM results," he added.

Like Mariam, Rishivigknesh also initially had worries of adapting when he first joined 4 years ago, but his fluent command of Chinese made him settle in just fine.

Other races, including Indians, can also join lion dance troupes like him, he noted.

"We must be open-minded, and learn to ignore haters. Lion dance is not only by the Chinese, and for the Chinese.

"I'm having so much fun being part of this team. Plus, I make my own money doing this, so I have no complaints."

Khuan Loke team manager Eric Fong agreed with both Mariam and Rishivigknesh that lion dance is not only about the Chinese.

"We not only get invited to perform at Chinese-organised events, but also at Malay functions and those organised by Malay tycoons.

"Even tomorrow, (Chinese New Year Day), we will be performing at an open house attended by the Yang di-Pertuan Agong," said Fong.

"This has nothing to do with religion. It is cultural, and a form of sports."

According to him further, there are about 6 to 8 non-Chinese (including Malays and Indians) in Khuan Loke.

Bigg Boss Abishek's First Post After Getting Eliminated from the Show!

Tamannaah Sues the Makers of Masterchef Telugu Because of This Reason!

Actress Tamannaah Bhatia has taken legal action against the makers of Masterchef Telugu because of this reason!

Actress Roshni Haripriyan to leave the Bharathi Kannamma serial? Here's what we know...