Meet The Hero Who Captured Communists Without Bloodshed

Arresting communist insurgents in their own turf without firing a single shot may sound like an impossible feat, but it was just another day at work for former policeman Paul Kiong.

Arresting communist insurgents in their own turf without firing a single shot may sound like an impossible feat, but it was just another day at work for former policeman Paul Kiong.

In his operations between 1976 and 1986, the retired police superintendent not only managed to round up 43 communists without bloodshed, but also saw through their rehabilitation.

The SP medal, while it does not carry any titles, is the highest federal award that is - above the Darjah Yang Maha Utama Kerabat DiRaja Malaysia (D.K.M) and darjah Pangkat Pertama Seri Maharaja Mangku Negara (S.M.N) awards which carry the title "Tun".

Since its inception in 1960, only about 30 people have been given the SP medal, which is typically given to members of the armed forces, or civilians who display "extraordinary courage and commit brave acts, and sacrifice." 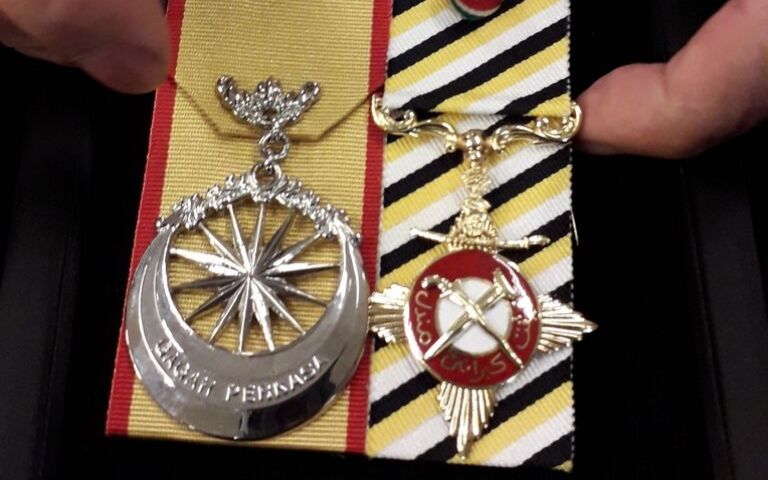 Upon joining the police force in 1967, Kiong was posted to the Special Branch in Johor and tasked to monitor and act against those providing logistic support for communist militants and conducting recruitment drive for the cause.

In 1975, he was promoted to Inspector and transferred to Perak, where infiltrated the communist network, posing as a sympathizer and doing trips to conduct letter drops between different militant units. Unbeknownst to them, he made copies of the notes after picking them from point A and before delivering them to point B.

"This is to ensure the Special Branch always remained one step ahead of the militants and knew their next move," he recalled.

Under the same sympathizer persona, Kiong also sometimes ferried armed militants from one point to another.

After capturing a communist supporter who used to supply food rations to militants, Kiong slowly converted the man and slid into his role as a food courier.

However, the supply, which is now controlled by the police, has now drastically dwindled in quantity.

Starvation drove many of the militants to desertion and this allowed the police to pick them up.

Apart from food rations, condom supplies were also cut off, and pregnancy drove militant couples in the jungles out to seek medical treatment, and they too, were nabbed and later converted.

Foray into the jungle

In 1981, Kiong took 12 converted militants who had agreed to work with the police to help in the capture of other militants into the jungle to try and link with the other groups.

However, he had no certainty that they were fully weaned off the communist ideology.

"I was alone with them in the jungle, and I had no guarantee that they have fully changed their minds.

"If they had snitched on me when linking up with the second group, I would have been slaughtered and the police would not have found my body in the jungle," Kiong said.

Luckily for him, the operation to round up members of the second group went smoothly in the hours of the night, without a single shot fired. Later, together with the members of the first two captured and converted units, Kiong managed to round up the third group of militants in the jungles of Ulu Kinta, in Perak.

Then, members of the third group worked with the police as well, to nab the fourth group members.

In all, 43 communist militants were nabbed and later rehabilitated without bloodshed.

Trust, as well as good planning, were key to the success, recalls Kiong.

"The captured insurgents believed that the government was doing it in their best interest and giving them a second chance.

"I trusted my ability and the training provided by the police. I also relied on the verbal promise given by the captured militants.

"I wanted to capture them alive, because to me, a dead body is useless," he said.

"They trusted me because I gave them a second chance at life, and that's why the operation worked," he added.

It's all in the head, he adds, referring the communist ideology inculcated in the militants.

"Once that is taken out, they are just normal people."

Kiong retired from the police force in 1998 and now lives with his son in Kelana Jaya.

He remains friends with many of the former militants.

If there's something that upsets this decorated hero, it is the racial polemics played up by certain parties, including political leaders, for their own gain.

"The situation where one race is being pit against another is not healthy for our multiracial society.

"We fought so hard to bring peace to the country, not to see the society break up, due to the doing of a small group of people with vested interests.

"I hope the younger generation will value the sacrifice and contributions made by veterans and be grateful for the peace and harmony that had been handed to them," said Kiong.

"The instigators should realise that peace and security was not upheld by only one race then.

"All races, including the Orang Asli, worked together at many levels, to bring the communist insurgency to an end and I hope the peace and quiet we have had ever since will prevail."
#News#SPaward#paulkiong