Schools To Return to Home-Based Learning After Raya Break- Minister

All schools nationwide will return to the home-based teaching and learning method (PdPR) for two weeks after the Hari Raya Aidilfitri school holidays next month. Here's what you need to know...

Shuman
All schools nationwide will return to the home-based teaching and learning method (PdPR) for two weeks after the Hari Raya Aidilfitri school holidays next month.

According to Senior Education Minister Radzi Jidin, the directive will apply from May 16 to 27 for schools in Group A (in Johor, Kedah, Kelantan and Terengganu), and May 17 to 28 for those in group B (the remaining states).

The school holidays to celebrate Aidilfitri are scheduled from May 7 to 15 for schools in group A, while it is from May 8 to 16 in group B.

After this holidays, students will follow the PdPR method, until the schooling sessions breaks again for the term holidays from May 28 to June 12 for group A schools, and May 29 to June 13 for group B schools.

This means that students will not have to observe the face-to-face learning method for more than a month, from mid-May to the middle of June.

Radzi told a press conference yesterday that the decision was made to avoid the risk of COVID-19 infections in schools after the school holidays.

"Last year, the schools were already closed during the Aidilftri festive period, so we don't know what the post-Hari Raya data will be like.

"We are especially worried about those who will return to the hostels, because there is a possibility of some having contracted the disease from outside, so we are taking this step to control the spread," Bernama quoted the minister telling a press conference yesterday.

Radzi added that students and pupils living in school hostels under the Ministry of Education nationwide, will also be allowed to return home to celebrate Hari Raya Aidilftri, and resume learning via the PdPR method for two weeks after the holidays. 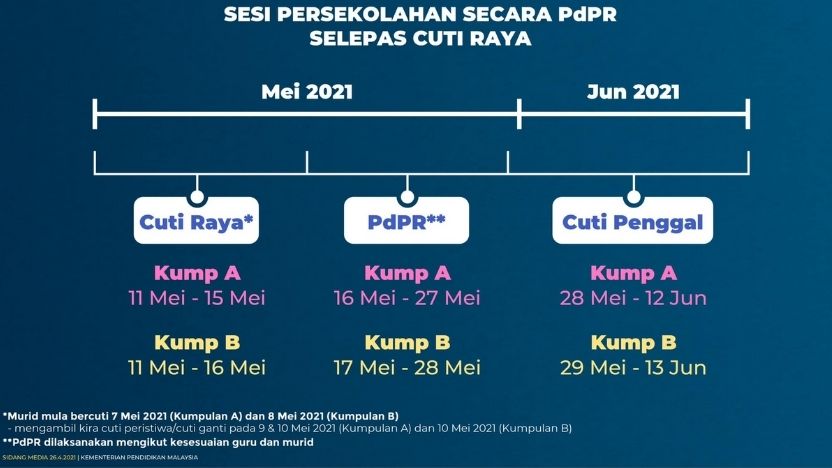 He pointed out that out of the 99 education clusters, 52 involved schools under the ministry, with 2,274 cases. This comes to about 4.8 percent of the clusters, of 2.07 percent of cases.

He further assured that the majority of infections reported in schools were sporadic cases, where the children had been exposed to the disease outside the school.

"We're not saying we're perfect, but we will do our besy to keep infections to a minimum with the SOP."

Health Minister Dr Adham Baba had previously revealed that until Apr 20, there have been 83 COVID-19 clusters linked to the education sector, involving 4,686 cases.

The rate of closures have caused concern among many parents, who have either stopped sending their children to school, or are questioning if an outbreak is needed before their children's schools are closed, and lessons from home are resumed.

Malaysia has been consistently recording a high number of COVID-19 cases in the last few weeks.

Yesterday, a total of 2,776 new cases and 13 deaths were reported, bringing the total number of infections and fatalities in the country to 395,718 and 1,449, respectively.

The coronavirus has infected more than 148 million people, and killed over 3.13 million, worldwide.