SOP for Temple Weddings - Not More Than 20 Pax, No Receptions Allowed

Hindu couples can now have weddings at temples but the attendance cannot exceed 20 people, and no reception will be allowed to be held at the premises.

Hindu weddings at temples will now be allowed but the number of attendees will be limited to a maximum of 20, according to the latest directive by the National Unity Ministry.

According to a statement, the ministry said the Standard Operating Procedures (SOPs) was decided in a special ministers' meeting last week.

"It encompasses important matters pertaining to non-Muslim weddings, such as capping the maximum attendance at 20 people for weddings, and wedding registrations.

"Reception and banquets for weddings will not be allowed to be held at temples," said the statement.

Officers of the KPN will work closely with their counterparts from JPN, as well as state governments, to monitor the compliance of the SOPs set, by the temples, and to ensure weddings at temples proceed safely and smoothly, the statement added.

"The SOPs will also be subject to the 'new norm' guidelines by the MKN, and rules set by state governments at later dates." 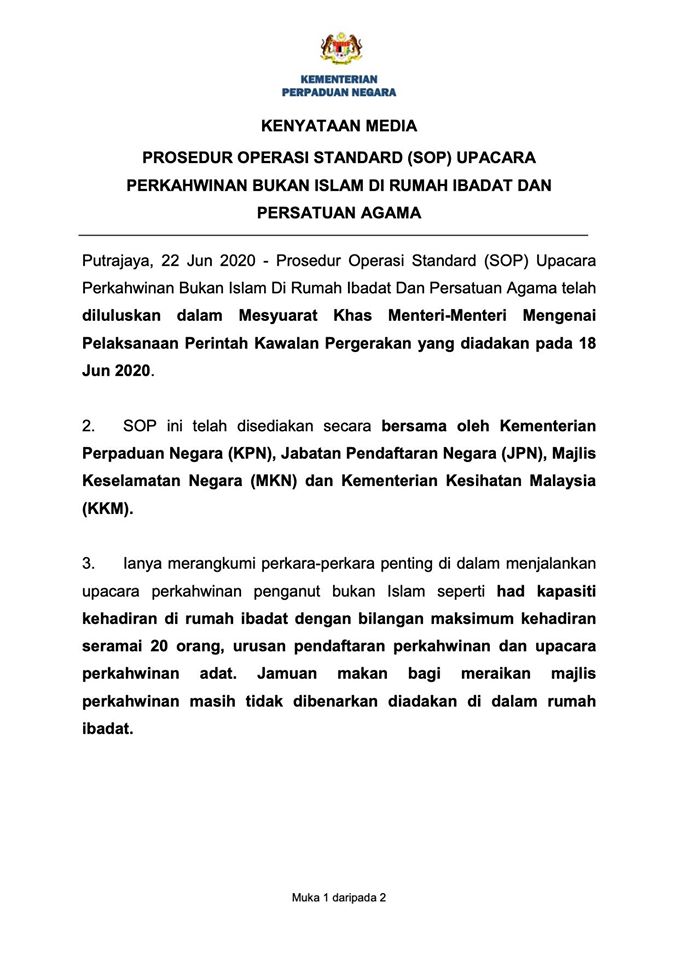 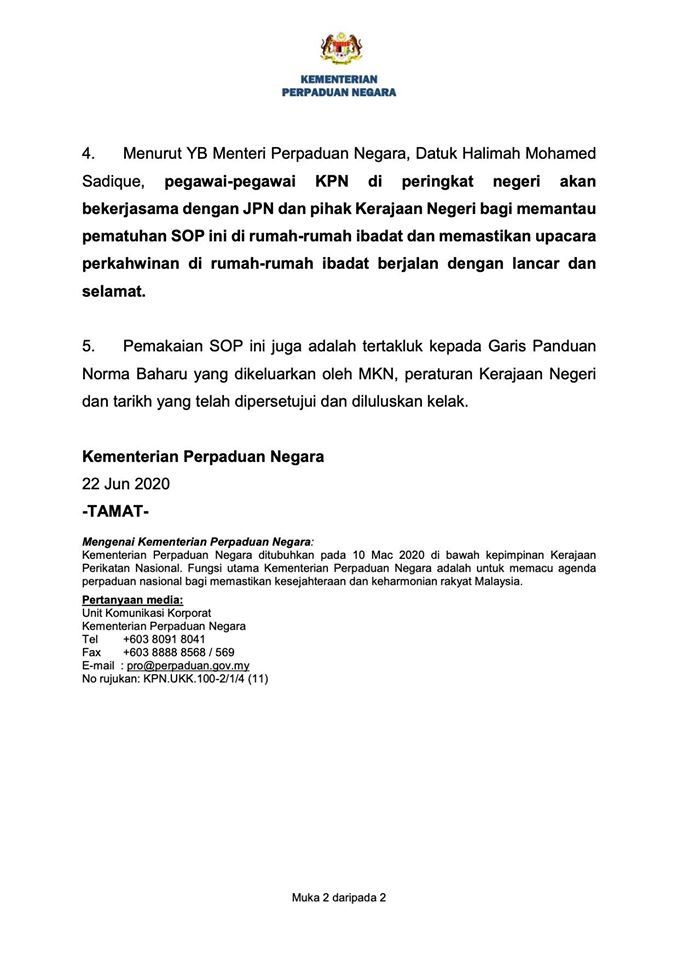 Earlier this month, the government allowed some 5,230 non-Muslim houses of worship nationwide, except those in red zone (areas with more than 40 active COVID-19 cases), to resume operations according to their normal hours.

However, the premises must operate at one-third of their normal capacity, and strictly follow social distancing procedures, among others. Devotees also have to have their temperatures checked, and use face masks and hand sanitisers.

The country is currently under the Recovery Movement Control Order (RMCO) until August 31.

Under the RMCO, almost all social and economic sectors are allowed to reopen, subject to strict adherence to the SOPs.

These include morning and night markets, food trucks, and food courts, among others. The domestic tourism sector was also reopened and activities like visiting museums and filming, were allowed to resume.

From July 1, cinemas, theatres, live events and public swimming pools, as well as those in private properties and hotels, can also resume - subject to strict adherence to SOPs.

However, pubs, nightclubs, reflexology centres and theme parks are to remain closed, and gathering for feasts and for religious purposes are still prohibited.

Globally, the infection and death tally from the disease has surpassed 9.1 million, and over 474,000, respectively.
#News#covid19#rmco