Today is the 49th birthday of ace filmmaker Gautham Vasudev Menon. Here are six of his most memorable movies.

It is undeniable that Gautham, fondly known as GVM, is one director than can make movies of all genres - from romance to action thrillers, equally well.

Although his resume spans about 20 movies in as many years, below are Astro Ulagam's pick on the director's top six movies, and their highlights.

The movie, which introduced actress Reema Sen, has achieved sort of a cult status among fans of GVM.

It tells of a love-struck man (R. Madhavan), who has to cross paths yet again with his former rival in college (Abbas) to win the love of the heroine, played by Reema Sen.

More than 20 years since its release, the movie is still enjoyable until today.

Highlight: Harris Jayaraj's music. The songs in this movie are evergreen, especially Azhagiya Theeye, and Vaseegara. It would not be a stretch to say that GVM's speciality is directing high-octane action thrillers, featuring clashes between a strict cop and the bad guy(s) and this movie can attest to this.

Suriya played his role as ACP Anbuselvan to a tee, and his on-screen chemistry with his wife Jyothika (Maya) set the screens on fire.

Highlight: The bad guy Pandiya, played by actor Jeevan, whose voiced was dubbed by Gautham himself. The level of brutality shown by this character shocked viewers then, and still does. Ulaganayagan Kamal Haasan aced his role as DCP Raghavan IPS. The most memorable scene remains one where Kamal marches on the house of the bad guy, and challenges his goons to remove his eyes, as he had required earlier.

Jyothika played Kamal's love interest Aradhana but the characterisation was not memorable enough to warrant a special mention.

Highlight: The serial killer pair whom Kamal is after, especially Amudhan played by Daniel Balaji. Who can forget his psychotic mannerisms, body language and voice tone when committing the gruesome murders, and challenging the cops who are after him? The movie illustrates Suriya reminiscing his life he shared with his father, during the various stages of his life. It is inspired by Gautham's own life and was a tribute to his own father, who died the year before. It achieved critical acclaim for Suriya's portrayal of different characters, including that of a teenager and an old man. 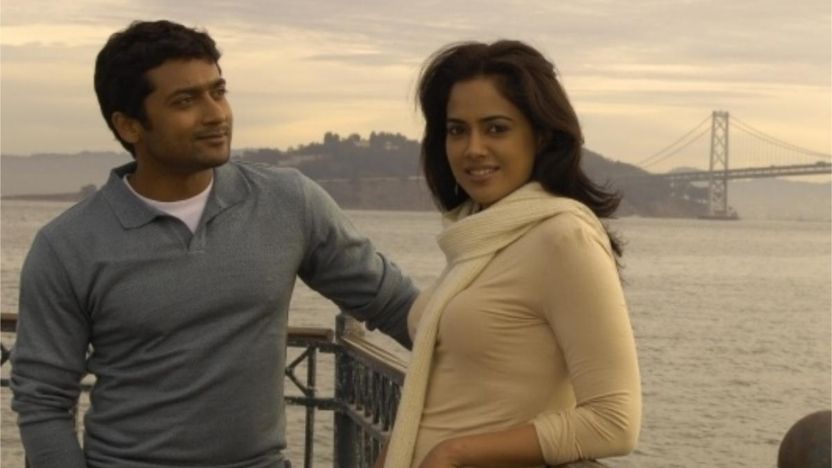 The romance between Karthik (Silambarasan) and Jessie (Trisha) was all the rage back then. Tears must have been shed when the couple went their separate ways at the end of the movie. This especially when the on-screen chemistry between the two lead actors were spot on. The third and conclusion of Gautham's police franchise, this is another high-octane action flick starring Ajith Kumar, Trisha and Anushka Shetty. Ajith played the role of DCP Sathyadev IPS exceptionally well, and his clashes with an organ theft mafia kept the audience on the edge of their seats.