Thiruppugazh is meant to be rendered in harmony with Raga, in rhythm to thala, with full knowledge of the meaning and with full devotion (bhava). It is rare to have the combination of all these qualities in one person. A devotee may not have the skill in music. A devotee may not have the full knowledge of the meaning. How such a devotee would adopt Thiruppugazh as his means of worship? “It is enough if you just listen”. Bhakta Prahlada (A perfect devotee of Lord Vishnu), the embodiment of devotion ranks ‘Sravanam’ (listening), among the first nine ways of attaining liberation (Srimad Bhagavatam). You may not be able to sing in accordance with Raga, you may not be able to comprehend the meaning. It is sufficient if you lend your ears by attending a Thiruppugazh Satsang. It is sufficient if you be the part of Thiruppugazh culture which kindles the spirit of devotion in your heart and elevates you to the experience of the presence of Lord Murugan within.

Thaipusam is just around the corner, where devotees are crowding Lord Murugan’s abodes in the hopes of successfully completing their vows. However, there’s one devotee who had more on her mind than the rest of us!

Brinda RishiKumar, the 2nd runner-up of Vaanavil Super Star, has vowed to re-create the ever famous ‘Muthai Tharu Pathi Thirunagai’ song from Thiruppugazh. 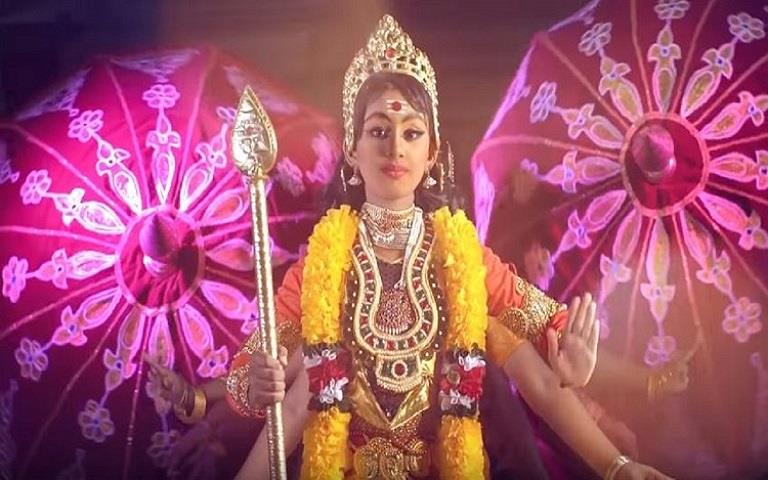 She was determined to give a modern touch to this tongue-twisting song, to make it enjoyable for all walks of life – from the elderly to young children. Her aim was to make the song modern and catchy so that it will cultivate the interest of the younger generations in listening and learning devotional songs.

In the hopes of making her dream come true, she has created a devotional album named Ayushman Bhava which features a fusion of famous devotional songs!

“My interest to do this album was actually inspired by my 6 years old son, who was involved in a year-end program in his music class. The children were required to learn and memorize ‘Muthai Thiru’ song within a week, where they acted it out as a drama.”

“Being a very difficult song to even to master by the adults, my son and his classmates learned it with passion within a week. Their interest in the devotional song gave me this idea of creating a fusion of such devotional songs, and my son even stepped in to help with the pronunciation while practicing,” said Brinda.

Check out the song here: